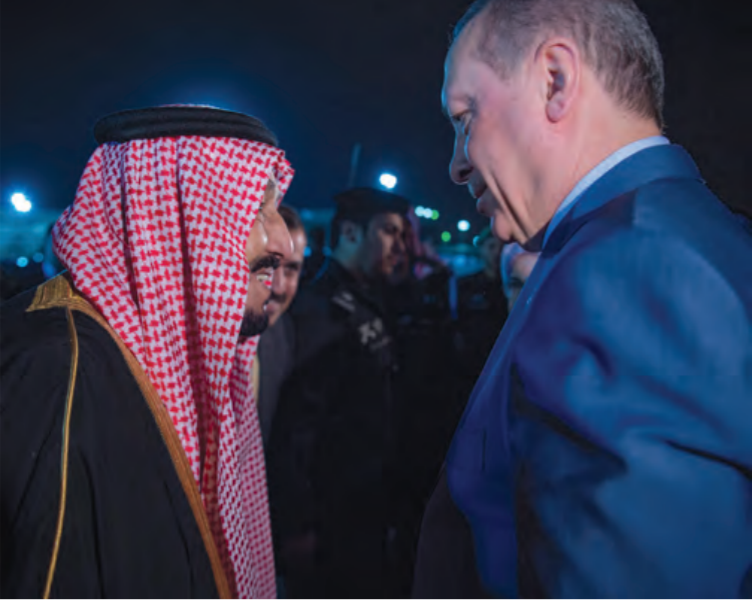 Published in the January 10, 2022 issue of the Jerusalem Report.

At the end of October, Turkish President Recep Erdogan ordered the US ambassador and nine other Western ambassadors to leave Turkey. Although this diplomatic brinkmanship was eventually resolved, Erdogan’s threatening action has been part of his decades-long growing hostility towards the West, especially the US.

This particular incident raised the ire of Erdogan because Western nations had the audacity to demand the release of a prominent Turkish businessman who did not receive due process and was in all likelihood innocent. The man was charged with financing the popular uprising of Turkish citizens in 2013 and the failed coup against Erdogan in 2016. The Turkish president repeatedly uses the attempted coup as a convenient excuse to scapegoat and undermine his opposition, and solidify his power base. Erdogan’s most recent provocative action was the arrest of two Israeli tourists taking photos of his palace.

If you think of Erdogan as a leader with a Western orientation because Turkey is a longtime member of NATO and has fought alongside America in the past, this may seem perplexing. But if you understand Erdogan and his political party (AKP) as part of the Islamist Muslim Brotherhood, it makes perfect sense.

This month, Turkey was the location for a Muslim Brotherhood gathering of 40 countries, including Hamas, to fight against the normalization of Arab countries with Israel.

According to analyst Jonathan Spyer, “Increasing evidence is emerging that Hamas is seeking to foment a new confrontation with Israel (in the) West Bank… The Istanbul conference… was the visible and declarative element of a broader reality in which Ankara is actively promoting the political efforts of Hamas… Turkey appears to be tacitly permitting Hamas to direct its campaign of violence in the West Bank from Turkish soil.”

Since 2000, Erdogan has turned what was once a stellar example for secular Muslim democracy and a reliable American ally into a repressive regime on par with the authoritarians in Russia, China, and Iran.

Like Iran, Erdogan’s rule is based on a fundamentalist religious belief. In Erdogan’s case it is a Sunni Islamist Muslim Brotherhood ideology, while in Iran, it is a radical Twelver Shi’ism. These strange bedfellows find common cause in their hatred of Jews, Israel, and the United States of America, but they are not natural allies, which should be remembered when one devises a strategy for the future. A Turkey that could turn back to the West would greatly help America stabilize the region.

Erdogan’s domestic problems are significant. Instead of following Western economists’ advice to stabilize his economy, he fired his economic ministers. His counterintuitive monetary policy – lowering interest rates while inflation exceeds 20% – has led his currency into a self-inflicted downward spiral.

In desperation, he is making overtures to his nemesis Israel, which remains an important trading partner despite his demonization of Zionism. However, his animosity has chased many Israeli tourists to Cyprus and Greece, undermining his economy. In the Middle East, you don’t have friends; you have adversaries with common interests, so both Israel and the US will listen to Erdogan trying to find some rapprochement, but should remain wary.

Turkey has a problematic foreign policy incompatible with being a NATO member. As reported in Haaretz, “the Financial Action Task Force gray-listed Turkey for failing to head off money laundering and terrorist financing. According to the president of the financial watchdog, ‘Turkey needs to show it (is) effectively tackling complex money laundering cases and show it (is) pursuing terrorist financing prosecutions… and prioritizing cases of UN-designated terrorist organization’s such as ISIL and al-Qaeda.’” Money laundering is something Turkey has in common with Iran’s Hezbollah proxy.

Turkey was also informed by a US Court of Appeals “that its key state-owned bank is accused of helping Iran evade US sanctions, and can indeed be prosecuted in US courts… US prosecutors accuse the Turkish bank of involvement in an illegal network dedicated to converting oil revues into gold and cash to benefit Iran, transactions amounting to billions of dollars.”

Yet Turkey remains a member in good standing as part of NATO’s strategic eastern flank. Ironically, NATO was created to thwart Soviet expansionism, yet NATO’s second-largest military purchased Russia’s most advanced anti-missile system, compromising American security. Congress removed Turkey from the US’s F-35 stealth program, but there have been no other significant consequences for much of its other questionable behavior.

Members of Congress I speak with think that Turkey has leverage over us with the Incirlik airbase being in Turkey. However, military experts tell me that it is not indispensable. Therefore, an American threat of abandoning it should be used to pressure Erdogan to reverse his provocative actions against Cyprus’ energy fields and his cozying up to American adversaries.

Both the Biden and Trump administrations chose to underplay the Turkish president’s anti-American rhetoric, his rabid antisemitism, his attempts to ethnically cleanse our Kurdish allies in Syria, threats to our Kurdish allies in Iraq, while giving sanctuary and logistical help to Hamas. The recent Hamas attack in Jerusalem killing an Israeli civilian was coordinated by Hamas’s Salah Al-Arouri operating out of Turkey. A NATO ally allowing a terrorist organization to coordinate terrorist attacks from its soil should receive tangible consequences.

America and the West are biding their time, hoping Erdogan will pass from the scene sooner rather than later, but that is not a serious strategy for the world’s superpower. Meanwhile, Erdogan has eviscerated the secular, military, police, judiciary, academia, and the media from opposition viewpoints over the last two decades, leaving the opposition in a difficult position. For good measure, Turkey imprisons more journalists than any other nation in the world.

A glimmer of hope that Turkey could one day rejoin the Western alliance in more than name is that the more moderate Turkish CHP party has won recent municipal elections in Ankara and Istanbul against Erdogan’s AKP party. If CHP can consolidate forces with other opposition groups, and if Erdogan continues to bring the nation to the edge of economic calamity, it is possible a changing of the guard in Ankara could happen, but don’t count on it. If Erdogan thinks he will lose power, he will follow the authoritarian path of Putin and Xi, making himself president for life.

Europeans worry that a weak and vindictive Erdogan would unleash millions of refugees now sheltering in Turkey into Europe. The last wave devastated Europe, especially Germany, allowing over one million refugees displaced from Syria and Iraq.

In contrast, America’s vehemence against the Saudi government is much greater than toward Erdogan’s authoritarian government. Yet Saudi Arabia has made some significant reforms. Unlike Turkey, the Saudis want to ally with the US. Even if the Saudis have a problematic human rights record, and too many of their citizenry supported jihadist elements in the past, there has been a profound change in these activities over the last decade toward moderation.

As Dore Gold, president of the Jerusalem Center for Public Affairs, said, “How much Saudi money is now going to Hamas? How much today reaches them? The answer is zero. In fact, Saudi Arabia is not giving a dime to any of the terrorist organizations. Today the main countries funding Hamas are Iran and Qatar. What about the propagation of extremist ideologies? Back in 2001, the Muslim World League, headquartered in the Saudi Kingdom, spread the ideology that supported a new wave of global terror. Yet today, its secretary-general took a delegation to Auschwitz. We are in a different world.”

For all of their flaws, today’s Saudis are unlike Iran, who openly terrorize, demean America, plan the destruction of Israel, and whose human rights abuses are full display. It is sad to see the US and Europe willing to ignore these realities for a flawed nuclear deal with billions in economic benefits for Iran.

There is a word for this: hypocrisy.

America chooses to ignore much of Iran’s malign behavior, hoping that appeasement will be reciprocated with a return to the nuclear deal. Iran just can’t say yes to hundreds of billions of dollars in sanctions relief because its Islamist ambitions trump normalization with satanic America. Yet it may still get the billions in sanctions relief for a temporary pause in enrichment, aka the “Less for Less” deal, while it continues to be the world’s chief sponsor of terrorist attacks.

In contrast, America chooses Saudi Arabia as its permanent whipping boy, knowing that the kingdom doesn’t have the leverage of Iran’s nuclear weapons capability or Turkey’s status as the second-largest military in NATO, sitting at a crucial crossroad of the world.

“It is not clear that even with enough diplomatic tenacity, Washington can rebuild trust and strategic ties with Ankara,” said Steven Cook of the Council on Foreign Relations. “Going forward, the United States needs to adjust its expectations… [and] develop other options.”

If we had a balanced scale – the Turks and Iranians on one side, the Saudis on the other – there is little doubt that the Turks and Persians would be the winners, combining their support for terrorism, hostility to the US, and abuse of their people. This is not a whitewashing of the Saudis but simply a sober assessment. Defining the US-Saudi relationship by the Khashoggi affair does not advance our interests, which is not to minimize what happened. By the way, why did no one question Turkey’s flouting of international law with video and audio surveillance in a foreign embassy?

America under President Biden has chosen to slow-walk if not mothball fostering new alliances to expand the Abraham Accords, lest it offend the Iranians. This was confirmed to me by the ranking member of the Senate Foreign Relations Committee, Senator Jim Risch. Neglected and abandoned American partners will look elsewhere if they believe America is unreliable, sending a message worldwide. What begins in the Middle East doesn’t stay in the Middle East, but is heard by American allies across the globe.

The Saudis and Emirates are already meeting with Iran, realizing they are likely to be abandoned to the Iranians. Is extending the Iranian orbit to the Gulf in America’s interest? To the moderate non-democratic Muslim Middle East, aligning with the authoritarian regimes in Tehran, Beijing, Moscow, and Ankara may seem a better bet than aligning their fate to the whims of an ever-changing American foreign policy.

The Biden administration has chosen a “maximum deference” strategy with Iran, with behind-the-scenes sanctions relief given to Iran without any reciprocity. Iranian oil flows to China, and Iranian electricity flows to Iraq, enriching Iran. Both are sanctionable offensives, but the Biden administration has not shared this with the American public. There is a word for this type of foreign policy: appeasement. Meanwhile, the Saudis are begging the US to sell them defensive missile systems.

The Middle East is not done with the US. It could be in the Straits of Hormuz and Bab el Mandeb, choke points for fossil fuel shipments that like it or not, run the global economy. It could be a regional war between Iran, Hezbollah, and Israel ignited by Iran’s march to a nuclear weapon, or even a Turkish invasion of northern Syria to ethnically cleanse its Kurds. Most likely, it will be something we didn’t anticipate.

Before that happens, it would behoove the current and the next administration to reevaluate the American relationships with Turkey, Iran and the Saudis. Bring the Saudis in from the cold, pressure Turkey with the hope it can move back towards a NATO orbit, and stop appeasing the Iranians.