The best insurance for survival is a nuclear umbrella 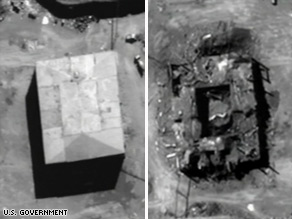 Photo: Before and after picture of building struck during Operation Orchard in Syria, Source: Wikipedia.

What if Libyan strongman Moammar Gaddafi had not given up his nuclear weapons? Would he still be in charge of Libya? What about Saddam Hussein? What if the Israelis had not hit the Osirak reactor in 1981 before he marched into Kuwait in 1990? Would he not only still be in power in Iraq and Kuwait, instead of being executed for war crimes, but would he have felt invulnerable and invaded Saudi Arabia, Bahrain and the United Arab Emirates?

Having your own nuclear umbrella is the ultimate deterrent.

Now, imagine if Ukraine hadn’t given up its nuclear missiles in 1994 for ethereal promises from Russia, the United States and the European Union that they would guarantee its territorial integrity. Would Russian President Vladimir Putin have invaded Russia in 2022?

Ukraine’s security was guaranteed by Russia, the United States and the United Kingdom in the Budapest Memorandum, which promised to respect Ukrainian independence, sovereignty and borders in exchange for giving up the world’s third-largest nuclear inventory. The agreement obligated the parties to “refrain from the threat or use of force against (its) territorial integrity,” affirming through a signed commitment to “seek immediate” U.N. Security Council action “to provide assistance to Ukraine … if Ukraine should become a victim of an act of aggression.”

If Ukraine still had its nuclear weapons, then it would still be sovereign, and the Russians would have had to be satisfied with much smaller gains. During this war, Putin has used the nuclear card to successfully intimidate his Western rivals, making them believe that he may be irrational.

The ultimate nuclear umbrella is the one where you control the WMD—weapons of mass destruction—yourself. It is the most potent form of deterrence against an enemy. Just ask the cloistered and unpredictable tyrant in North Korea. America has extended a nuclear umbrella to non-nuclear allies, notably NATO countries, South Korea, Australia and Japan. This form of assurance has lost credibility as the world sees the promises to Ukraine evaporating.

The third form of a nuclear umbrella does not include a nuclear weapon at all. It is a multi-layered anti-missile defense system, best exemplified by Israel’s anti-missile systems. It extends from its Iron Dome to David’s Sling to the Arrow and Patriot missile defenses, each layer fending off longer- and higher-range missiles. In theory, if intercepted away from the target nation, nuclear, biological and chemically laced missiles can be thwarted.

The Middle East has taken notice. There is little doubt that if Iran builds its own nuclear arms, nations from Saudi Arabia to Egypt to the UAE will want and would pay a king’s ransom to possess nuclear weapons or the ability to produce them. The North Koreans would only be too happy to sell a few of their spares.

In the 2000s, unbeknownst to America but not the Israelis, North Korea helped build a nuclear reactor in Syria. Suppose Israel did not eliminate it in a preventive strike in 2007. In that case, the outcome of the Syrian civil war that occurred just a few years later could have been a nuclear catastrophe, especially knowing that Syrian President Bashar Assad didn’t hesitate to use chemical weapons on his own people. There is no reason to believe that he wouldn’t have used other weapons of mass destruction on the Syrian rebels if he felt he might fall from power. As it is, he killed hundreds of thousands of his own citizens in a scorched-earth war supported by his Russian allies.

Even more frightening is the thought that ISIS (Islamic State or Daesh) could have gotten its hands on the Syrian reactor as it conquered that region during its short-lived caliphate. Can you imagine ISIS with WMDs? Does anyone think they would not have used them?

This brings us to the Islamic Republic of Iran and its revolutionary jihadist ideology. They have mastered uranium enrichment and have the ballistic missiles to deliver them. According to documents Israel stole from their archives in 2018, they were far ahead in weaponizing a warhead nearly two decades ago.

According to nuclear expert David Albright of the Institute for Science and International Security, “Iran now has enough enriched uranium to produce weapons-grade uranium for two nuclear weapons in two to three weeks after breakout commences.” With that information, it is astounding that the Biden administration wants to give tens, if not hundreds of billions, of dollars in sanctions relief and new trading opportunities for a minor pause in their nuclear program. At the same time, they are asking absolutely nothing else in return to curb using those funds being used for terrorism, expansionism or human-rights abuses of their own people.

An Iranian nuclear umbrella would allow Iran to unleash its proxies like Hezbollah with their arsenal of 150,000 missiles on Israel. They would know Israel would be hesitant to retaliate against the source, Tehran, lest Supreme Leader Ayatollah Ali Khamenei use it as an excuse to eliminate Israel and bring the return of the Hidden Imam. Iran’s former president Ali Akbar Hashemi Rafsanjani, a moderate, called Israel “a one-bomb state.”

Iran’s goal is to have a nuclear umbrella to make it invulnerable to severe attacks. The Gulf states, Egypt and Jordan also fear an Iranian nuclear umbrella, making Iranian territory immune to retaliation from Houthi and Iraqi proxy attacks. Is it any wonder why they will want nuclear weapons? They won’t trust an American offer to be protected. That is the lesson of Ukraine and its connection to the Middle East. Pieces of paper and empty promises are worthless when your enemy has nuclear weapons, and you don’t.

A nuclear Iran will usher in the next frightening chapter for the Middle East, massive nuclear proliferation.

A new American agreement with Iran would guarantee it. An Israeli strike—cyber or kinetic—on Iran’s newly excavated, deeply buried Natanz atomic facility, perhaps 5,000 feet deep, will not be an easy task. But the lessons of Ukraine make preventative attacks and nuclear proliferation much more likely.