What makes a nation strong? 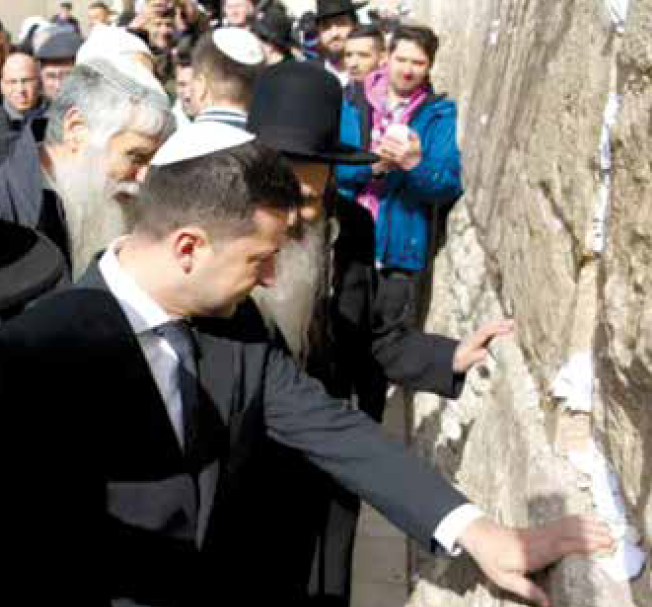 Published in the June 13, 2022 issue of the Jerusalem Report.

As the Western world remains fixated for the time being on the unfolding drama of the Russian invasion of Ukraine, issues of national cohesion, patriotism and national identity are being discussed more than ever. So when President Volodymyr Zelensky said he wanted Ukraine to become a “big Israel” – what did he mean?

On a superficial level, Ukraine, like Israel, will constantly be threatened by a neighbor that wants to vanquish it, making security paramount. Iran and the Palestinian Arabs reject the very existence of a Jewish state, while the Russian bear intends to dominate and incorporate Ukraine. In both cases, freedom and prosperity just across the border are the last things a repressive autocracy wants.

“Because Ukraine is the nation-state of the Ukrainian people, with a 20% Russian minority, and Israel is the nation-state of the Jewish people, with a 20% Arab minority inside the Green Line, they are very similar,” Michael Walzer, a leading liberal scholar, said in a recent interview. “And if you realize the importance of Ukrainian nationhood, I think it is much easier to realize the value of Jewish nationhood… I think we should be making the point that if they support a nation-state like Ukraine, they should support a nation-state like Israel.”

But beyond that, there is a more profound truth. Ukraine and Israel share the most precious and indispensable asset necessary to sustain a nation: a resilient national cohesion and ethos, belonging to something bigger than you as an individual, being committed. The nationalism of the Ukrainians has similarities to the passion Jewish Israelis have for their country, Zionism, and the right and privilege to your own land, to control your destiny.

Ukraine has taught the world that a nation cannot remain strong unless its population sees its national destiny as worth fighting for. Israel has known this since its very beginning, being attacked within five hours of coming into existence. That is what many people thought Zelensky meant when he said he wanted Ukraine to become a “big Israel.”

A citizen army that believes in fighting for their land and independence is essential if you have external existential threats and you are not a superpower. Israel and Ukraine are learning that this is the secret sauce for building and sustaining a nation with a common purpose, especially in times of war.

For a nation like America and democracies with large immigrant populations, national cohesion cannot be based exclusively on ethnicity or religion; it must derive from civic and cultural patriotism, citizens feeling they share a common destiny and values. Although the expression is out of fashion, multicultural democracies need to embrace a post-modern melting pot, not an unmixing tossed salad of mutually hostile, disparate identity groups.

A Wall Street Journal article states that this would be a “living,breathing, ever-changing everyday culture open to immigrants and ethnic minorities. Though minority groups often retain pride in elements of their ancestral culture, the vast majority of them are, simultaneously, perfectly comfortable with the cultural mainstream… civic patriotism, to be proud to be an American… is to love the ideals and institutions of the country committed itself to in the Declaration of Independence and the Constitution.”

This is the Achilles heel for Israel with an external enemy that wants to destroy it and an internal citizenry of Arabs who are close cousins of the outside adversary. It is hard to create a melting pot of shared destiny when much of your minority citizenry does not believe Judaism has a national dimension. Palestinian Arabs are manipulated by too many of their secular and religious leaders based on uncompromising Islamist ideals that cannot countenance anyone living in a land once controlled by Islam. Their demand for a right of return for descendants of refugees is the vehicle to end a Jewish state that is embraced by the progressive left.

A ray of hope is the courageous Islamist leader Mansour Abbas, the leader of Ra’am, who joined the current Israeli coalition and has acknowledged Israel as a Jewish state and defended against the charge of apartheid leveled at Israel by the progressive left and the PLO. Unfortunately, the far-left in Israel, best represented by long-time Haaretz writer Gideon Levy, said, “An Israel Arab joining a Zionist party is by definition a Zionist Arab; a Zionist Arab is by definition a collaborator.”

So let’s look under the hood to see what makes nations strong, using America and Israel as democratic examples. Both are under the stress of internal minority groups that think the nation’s foundation is corrupt. In the case of America, its progressive wing has been promoting the idea that America was born in sin in 1619, the year the first enslaved people arrived in America, which ever since has done more evil than good.

For Israel, it is the Palestinian citizens of Israel who quietly appreciate the freedoms they receive, which no other Arab in the Middle East enjoys, while at the same time complaining about living in a nation that defines itself as Jewish.

So what can Ukraine learn from the Israeli and American models of democracy?

The essential function of a government is to protect its citizens from external enemies. That is, first and foremost, about having and maintaining a strong military. Israel’s self-confidence to take preemptive actions against its enemies is something Ukraine may wish to emulate but in reality is unlikely to, as its adversary has nuclear weapons.

The first lesson for a nation is to be militarily strong, not to allow your enemy to possess a game-changing threat that can be used to bring you to your knees. For Ukraine, that ship has sailed, as they unilaterally disarmed themselves of nuclear weapons for the false promise of territorial security (the Bucharest Memorandum of 1994).

The lesson for Israel is never to allow Iran to become a nuclear threshold state. Nations that want to remain strong won’t let adversaries that boast their national mission is to eradicate you possess nuclear weapons. A nuclear-armed Iran would be a game-changer. So if Israel is capable, it will do anything to impede Iran’s nuclear progress. The Ukrainian war has also challenged the Cold War concept of MAD (Mutually Assured Destruction), as Putin has threatened the use of tactical nuclear weapons.

As important as it is to be able to defend yourself by yourself, there is another equally important factor for a nation to remain strong: a robust economy. The US and Israel are strong because of innovation and entrepreneurship, but both are in constant tension between governmental regulatory overreach and free-market capitalism. Strong nations need their private sectors to flourish within a well-governed, corrupt-free economy.

As Hoover Institution economists John F. Cogan and Kevin Warsh said in a Wall Street Journal interview, the US economy “is among the most powerful forces for good in the history of humankind.” Its foundations “are private property rights, the rule of law, free and competitive markets, and limited government.”

Unfortunately, too much of the world sees more promise in Chinese-style authoritarian capitalism, as the messiness of democracy doesn’t comport well with authoritarian leadership and self-interest.

Before the Russian invasion, Ukraine was an evolving democracy, not at the level of Western democracies. Zelensky has been a hero to the West, but if his country is to be strong after the war, they need to remember that the corruption that existed beforehand must be rooted out. Israel and the US are models for Ukraine to recognize that a strong country is built on an independent judiciary, freedom of the press, and freedom of speech.

The Ukraine war has demonstrated to the world the danger of being dependent on authoritarian actors like Russia for vital resources. The lesson for maintaining or building a strong democratic nation is to create stable supply pipelines so you are not at the mercy of authoritarians like Russia and China. America, take note.

Whether it is Palestinians, African-Americans, or Ukrainians who side with Russia, minority populations who want to end the majority’s vision for the nation remain an extreme challenge to bring into the fold. If they cannot embrace their country living as a minority and find a place in its shared destiny, the majority will fear them. When religion, as in the case of Palestinians, is a key ingredient, it becomes much more challenging to manage, as evidenced by the calls of Palestinian Arab leaders to revolt because the Jews are desecrating al-Aqsa Mosque with their filthy feet.

Fortunately for America, it is a superpower, with its citizenry not asked to do compulsory military service like the Israelis or take up arms like the Ukrainian citizens. For America to remain strong, it can learn from the Israeli and Ukrainian cohesion. It should consider compulsory national service for its teenagers as a path to building national unity, especially for a nation questioning its foundational principles. For Israel, it should insist that its haredi Orthodox population and its Palestinian Arab citizens of Israel, who overwhelmingly avoid military service, perform national service.

The West has a new internal source of weakness: postmodern academia, which is canceling the free flow of ideas permeating the minds of our future leaders. Freedom of speech is essential for a strong nation, and today too many young people in the West think it is legitimate to shout down another point of view as their right of speech. This is a prescription to weaken a democratic nation.

Western journalists raised in these academic woke classrooms now routinely editorialize the news, erasing the separation of fact and opinion. To keep democracies vital and robust, all ideas, even uncomfortable ones, except those calling for violence, must be heard.

Let’s hope that Ukraine can regain its sovereignty and use the best models of democracy from America and Israel, embracing their strengths and being wary of their weaknesses to help build a new independent democratic nation aligned with the West.

The free world needs an exceptional democratic superpower in America that isn’t constantly bemoaning its faults. If they can see beyond their prejudices, many peoples should use Israel as a democratic beacon of hope for small countries with complex challenges. How Israel has remained a functional democracy under 74 years of existential threat is the miracle of the 20th and 21st centuries. That, in part, is why Ukraine wants to be a “big Israel.”