My visit to Saudi Arabia: Observations and Analysis 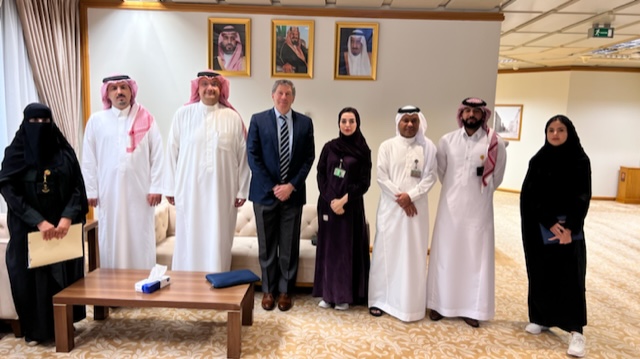 Published in the January 9, 2023 issue of The Jerusalem Report.

Photo: Dr. Mandel with Saudi officials at the Presidency of State Security.

Thirty years ago, my colleague and co-author at the Massachusetts Eye and Ear Infirmary accepted a position as head of the Ophthalmology Department at King Khaled Hospital in Saudi Arabia. He packed up his family and moved to the kingdom. At the time, women were not permitted to drive; and when they were out in public, they had to be escorted by a male relative. “Conservative” is an understatement to describe Saudi society in that period. During my residency in New York, I sublet an apartment from two Pan Am flight attendants. They told me that when they visited their boyfriends working at the giant ARAMCO oil facility in Saudi Arabia, they rarely ventured out of the living quarters.

Think what you want of Crown Prince and Prime Minister Mohammed bin Salman (MBS), but since taking control of the kingdom in 2016, with the support of his father, King Salman, the visible changes in Saudi society have been nothing short of revolutionary. Pre-2016, I doubt if, as the Jewish Security editor of an Israeli magazine, I would have been invited to discuss geopolitics at the Saudi Embassy in Washington, DC, or would have received such a warm welcome in the kingdom by the Foreign Ministry and security establishment.

During my meetings with many Saudi officials, despite my clear record of advocating for the US-Israel relationship, I felt no animosity. This is significant and should not be minimized. The risks to the stability of a conservative society of such rapid reforms will challenge the crown prince, especially when he becomes king and his rivals come out of the woodwork to undermine his authority.

My consultations in the kingdom included meetings with the last two Saudi ambassadors to Iran before they cut off diplomatic relations; the former ambassadors to Pakistan, Lebanon, and Sudan; and a former high-ranking Ministry of Defense official at the Rasanah (International Institute for Iranian Studies). I also was greeted by 20 officials of the Presidency of State Security and 15 staff of the Etidal Global Center for Combating Extremist Ideology, where I had a first-hand look at real-time online counterterrorism.

My most frank discussion was with the director of policy planning at the Ministry of Foreign Affairs. We discussed the state of US-Saudi, Saudi-Chinese, and Saudi-Russian relations and the existential threat of an empowered Islamic Republic of Iran to the kingdom. I had a long and substantive conversation over dinner with the Prince Faisal Center for Diplomacy at the Foreign Ministry with their leadership on American relations, Israel, geopolitics, and regional security. I was also invited to meet with the Somalia ambassador to the kingdom and his diplomatic team.

Over many days, I got to know the director of the Office of the Director General, as well as the director of public relations and the Media Department. The latter introduced me to his 15-year-old son and the boy’s Egyptian classmate. Getting another perspective while traveling around Riyadh, dining with Saudis, and roaming around added to my insights.

Perhaps not from the perspective of life in the US but to someone who looks from afar, the pace of change in the kingdom in such a short time, six years, is extraordinary. I saw many women without any head coverings, women congregating and dining in public, and women driving. In just six years, women’s participation in the workforce increased from 7% to 30% and growing. Western music was played in public. When I asked Saudis about the changes, they said the changes made their head spin, knowing it was just a short time ago that none of this could have been expected.

In my meetings on security, diplomacy, terrorism, domestic challenges, and international relations, a small but not a negligible number of women were present and took essential roles. This is not meant to be a love song for Saudi Arabia. Still, my reception and the people were genuinely welcoming, much like my visits to Kurdistan, Abu Dhabi, Bahrain, and Dubai – nations that are pro-American and want to develop good relations with Israel. The warm reception I received in these nations was in contrast to the lukewarm reception I experienced when I visited the Egyptian Foreign Ministry or met with Jordanian Parliament members, despite both countries having diplomatic relations with Israel.

With this as a background, my goal during this visit was to understand better:

With a disproportionately young Saudi population looking for a significant leap into modernity and a monarchal system that must placate a conservative religious establishment, too rapid a transformation could destabilize the kingdom. Mohammed bin Salman, who may be king for the next half a century, has a difficult juggling act to perform.

Since MBS may be king for the next 50 years over the terms of many American presidents, it is incumbent on the US and the future monarch to find some way to live together for shared interests. Saudi fossil fuel reserves will continue to give the kingdom leverage for generations, especially as the Chinese and Indian thirst for energy won’t be quenched with solar and wind alone.

The recent historical record tarnishes the Saudis’ image in America. From Khashoggi to 9/11 to recently decreasing oil production as Americans pay too much at the pump and a mixed human rights record, many Americans have made them enemy number one in the Middle East. Demonizing the crown prince has become a bipartisan sport in the US.

Amnesty International stridently described the reign of Mohammed bin Salman, since he assumed the position of crown prince in the kingdom, as the darkest there has been in Saudi Arabia regarding human rights and freedoms. A declassified CIA report concluded that the crown prince had authorized the murder and dismemberment of Saudi journalist Jamal Khashoggi inside the Saudi Consulate in Istanbul in 2018.

But where do we see salacious leaked de-classified CIA reports on the Iranian supreme leader’s complicity in terrorism abroad and human rights abuses at home during the seven years of nuclear negotiations? We don’t. The Biden administration, prioritizing a nuclear deal with Iran, may see the hushing up about Iran’s atrocities as realpolitik, but the Saudis see it as a flagrant double standard.

From a dispassionate American viewpoint, it is in our interest for geopolitical and human rights issues to remain on respectful terms with the Saudis, being more likely to influence them if our relations are amicable. A destabilized Saudi Arabia overtaken by Iran or the Muslim Brotherhood would be a disaster for the US and Israel.

During my meetings, there was a strong emphasis, especially with the Etidal Global Center for Countering Extremist Ideology and The Presidency of State Security, to show that Saudi Arabia has ended any tolerance for Salafist financing or promotion of hate speech to non-Sunnis. The number of government officials and NGO leaders who greeted me far outweighed my importance. It was a statement of how intent they are on convincing the world that the Saudi government won’t look the other way when its religious establishment or citizens fund radical groups or publicly proselytize Wahhabism in foreign countries.

At the Presidency of State Security, the group was extremely serious, with fewer English speakers than at other briefing venues. Their mission is to preserve the security of the Saudi government by investing in the countering of extremism, preventing money laundering activity, and studying how people become radicalized. They focus on educational, social media, religious, cultural, and sports institutions to proactively prevent susceptible and impressionable people from being captured by radical ideologies. They said they are data-driven and work with Harvard and George Washington University.

I asked whom they considered terrorists. Yes, to Iran and the Muslim Brotherhood, but they said it is a political determination to categorize Hamas, the Taliban, Palestinian Islamic Jihad, and Erdogan’s AKP as terrorist organizations. They seemed most proud of their rehabilitation of known terrorists which, according to their statistics, was near 90%, although they did say there is some recidivism. They believe they have found a model for rehabilitation that could be used worldwide to prevent radicalization. They wanted me to convey to Congress that the KSA is independent and respects international law.

Etidal, the Global Center for Countering Extremist Ideologies, was established five years ago, as they noticed an international effort to focus on the root causes of radical ideology that leads to terrorism. Their approach was to monitor the world of radical ideas propagated on social media and be proactive with one-on-one chat conversations with those vulnerable to radicalization and the extremists themselves. They say that those who are recruiting future terrorists and sympathizers are very sophisticated in their approach and the use of social media. The analysis found that terrorist organizations use a 12-step recruitment platform to convert members online.

Etidal targets hate speech, which is one degree of separation from extremism because, according to them, tech companies have difficulty identifying it. Twitter and Telegram are often used by al Qaeda and DAESH (ISIS) operatives to recruit members. Etidal’s success is eight million pieces of content being removed, based on their research. Extremists target chat groups and use electronic gaming to identify and lure recruits. Unfortunately, with Elon Musk in charge of Twitter, believing that almost all speech should be allowed, one can expect radicals to return to Twitter in full force.

The promotional video of the Global Center for Countering Extremist Ideologies attempted to portray the kingdom as a place of tolerance, with photos of all religious denominations, including Orthodox Jews, as well as Condoleezza Rice and Mike Pompeo, who recently visited.

The Kingdom of Saudi Arabia has been and will be a significant player and influencer in security and economic issues throughout the Middle East and the world for years to come. As much as green energy proponents advocate for a carbon-neutral future, with India’s and China’s appetite for cheap fossil remaining their priority to sustain economic growth, Saudi Arabia will remain their primary address for domestic progress.

For the US and Israel, their green future will still be integrally tied to the health of the world’s economy, which will remain dependent on fossil fuels for decades. With all of the oil that will continually flow from the Middle East, it is crucial for the US, Israel, and Western nations to partner with Saudi Arabia, or it could turn its allegiance to adversaries of the West, especially China and Russia. That is not in American or allied security interests.

As for Israel, an off-the-record conversation with someone close to the next generation of princes told me it is not “if” but “when” the kingdom will develop relations with the Jewish state. Just writing that statement takes my breath away, as it would have seemed incredibly unlikely just a short time ago.