Does the Biden administration believe Iran is behind most Shia militias? 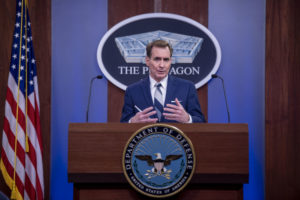 A controversy that occurred during a recent question-and-answer session for reporters by Pentagon press secretary John Kirby may have revealed a troubling insight into the Biden administration’s approach in rebranding Iran’s problematic image. He claimed that Shia militias that are causing so much trouble in the Middle East are not Iranian-controlled. After criticism made its way into the public arena, Kirby partially walked back his statement in a subsequent press conference, agreeing that some Shia militias are Iranian-backed. Was this a Freudian slip, a trial balloon or a real insight into administration thinking?

There is a well-documented history of the Obama-Biden administration misleading the public about the 2015 Iran nuclear deal—the Joint Comprehensive Plan of Action (JCPOA). Therefore, it is prudent to ask if Kirby’s first answer to a softball question that should not have flustered an experienced spokesperson was an accurate representation of the administration’s thinking. It’s all part of a strategy to create the illusion that the Islamic Republic is not responsible for supporting the majority of Shia militias throughout the Middle East in the hopes that in preparing the ground to rejoin JCPOA, Iran will be more palatable to the U.S. public.

So a primer on Iranian-controlled Shi’ite militias and what the administration is doing is in order.

What Kirby may have been attempting to do is frame the situation as an internal ethnic conflict between Shi’ite groups who are independent of Iranian influence. However, the overwhelming evidence is that Iran’s strategy is to create Iranian-controlled militias in the region’s crumbling nations to exert control and undermine U.S. interests while threatening American allies.

Statements like Kirby’s intensify Israel’s well-founded fears that America wants to pretend it doesn’t see Iran’s malign activity. Instead, the administration chooses to put all of its eggs in the JCPOA basket, focusing on the nuclear issue while ignoring Islamic imperialism. Almost no serious military or intelligence analyst believes the Islamic Republic of Iran does not control Shia militias, such as the Popular Mobilization Units in Iraq or Syria (local militias). Iran’s hegemonic ambitions carried out through its proxy network are a threat to be taken seriously.

A not-so-subtle warning for Israel not to attack Iran was posted by the White House in its Interim National Security Guidelines. The administration stated, “We do not believe that military force is the answer. … We will not give our partners in the Middle East a blank check to pursue policies at odds with American interests.” Is that a warning not to attack Iran in Syria, Iraq and Lebanon?

As in Lebanon, Iran is slowly swallowing Syria and Iraq. Iran’s Lebanese proxy Hezbollah is the dominant military force while effectively controlling its parliament. Iranian symbols appear everywhere, as though you were walking in Tehran. Iran’s Islamic Revolutionary Guard Corps (IRGC) martyr Gen. Qassem Soleimani was commemorated this year throughout the country with a massive statue placed in the center of the Lebanese capital Beirut. At rallies, Lebanese citizens under Hezbollah’s thumb wave the Iranian flag, not the Lebanese one.

What is groundbreaking in Syria is that Iran not only sent its IRGC troops with its Hezbollah proxy but has now recruited former Syrian rebels of local Sunni militias to create a permanent Iranian presence. The blueprint is the Hezbollah model in Lebanon. Iran’s goal is to surround Israel with its militias, proxies and allies, including Sunnis who are easily bought for money, bread or ammunition. Just think of the Sunni Arab Hamas terrorist organization in the Gaza Strip working with Persian Shi’ite Iran.

Alma, Israel’s best source for independent research on its northern border, has documented Iran’s support and control of Hezbollah, Shia militias, and now Iranian-controlled former rebel Sunni militias. This is groundbreaking information. The militias receive orders and salaries from Iran in conjunction with a well-thought-out civilian investment to support a long-term Iranian military entrenchment. In this way, Iran effectively takes control of weak nation-states like Syria, Iraq, Yemen, and Lebanon. For example, Iran is heavily involved in Syria’s post-war reconstruction, buying agricultural land, establishing community and educational centers to promote the Islamic Revolution’s values among the local Sunni population.

One should bear in mind that the IRGC’s Quds force’s raison d’être since the Iran-Iraq war of the 1980s is to spread the Iranian revolution throughout the Middle East while backing almost every terrorist Shia militia to further its goal. Thousands of IRCG soldiers and commanders operate beyond Iran’s borders, leading and strategizing on how to get the United States out of the Middle East and put Israel out of existence.

This is based on the concept of velayat-e faqih, or “guardianship of the jurist,” which gives absolute religious authority to the Iranian Supreme Leader, who is in charge of the world’s Shi’ites. Shias are thereby obligated to support the Islamic revolution everywhere in the world. The Biden administration should be cautious replacing radical Sunnis like ISIS and Al-Qaeda with extremist Iranian Shi’ism.

More than half of the pieces are in place to surround Israel. Next on the target list is the West Bank and Jordan to surround Israel with the threat of missiles and militias under Iranian control. All in preparation for a day when Islamist Iran unleashes its proxies to devastate Israeli civilians and destroy Israel’s infrastructure, with the hope that Israelis will abandon the Zionist experiment.

Dr. Eric R. Mandel is the director of MEPIN, the Middle East Political Information Network. He regularly briefs members of the U.S. Senate, House and their foreign-policy advisers. He is a columnist for “The Jerusalem Post” and a contributor to i24TV, “The Hill,” JTA and “The Forward.”