Who is winning the Gaza War of Attrition? 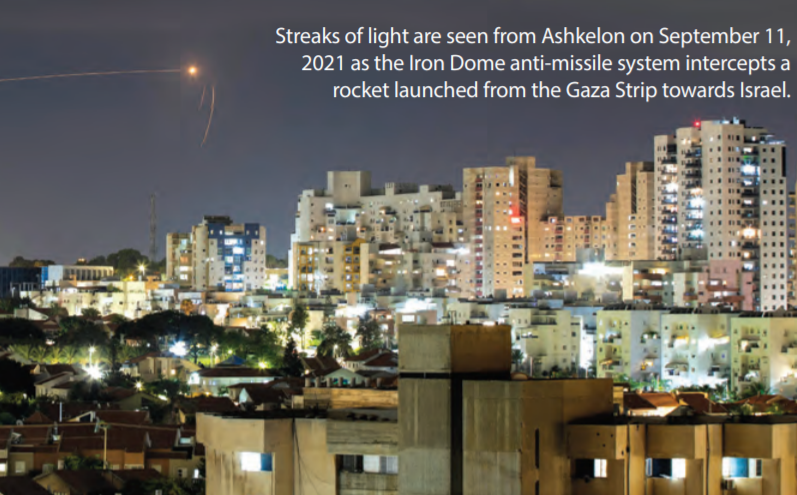 Published in the October 11, 2021 issue of the Jerusalem Report.

During a recent presentation, I was asked how Israel could get rid of Hamas from Gaza. My answer surprised and upset her. I said, you can’t. She also was displeased when I described what mowing the grass meant. More on that later.
Welcome to Israel’s unending War of Attrition with the jihadists of Gaza. In 2005, prime minister Ariel Sharon showed a leopard could change its spots. The champion of Israel’s settlement movement in the disputed territories, Sharon, completely withdrew Israel’s military and civilian presence from Gaza, the area Israel captured in its defensive of war of 1967. In one bold stroke, Sharon changed the Middle East and the Israeli-Palestinian conflict forever.

The Israeli public was profoundly divided on the wisdom of the Israeli withdrawal from Gaza. Many Israelis thought that the security implications of a complete withdrawal were too risky to take. They remembered just five years earlier, when the Israeli army left Lebanon, it was perceived in the Muslim world as a victory of resistance. Yasser Arafat watched Israel’s retreat from Lebanon, reinforcing the lesson that violent resistance works. Just two months after the Lebanon withdrawal, he started the Second Intifada. A nightmare of homicide bombers terrorized the heart of Israel and permanently transformed an Israeli electorate from Center-Left to Center-Right.

Once the disengagement began, the images of Israeli soldiers removing their fellow countrymen from Gazan settlements, with tears streaming down the soldiers’ and civilians’ faces, left an indelible imprint on the Israeli psyche. At the time of the disengagement (withdrawal), American media outlets and politicians across the political spectrum said that if the Palestinians of Gaza fire even one rocket or send a suicide bomber into Israel, the world will have Israel’s back.

So how would the Palestinian Authority respond to a complete Israeli withdrawal from Gaza in 2005? This was not just a gesture but the whole shebang, 100% of the disputed land in the Gaza Strip. For good measure, Israel withdrew from four settlements in Samaria, a down payment on a future disengagement from the West Bank if they passed the Gaza test. Many believe that if Sharon didn’t suffer a debilitating stroke, he would have implemented a unilateral disengagement from the West Bank.

Within weeks after Israel withdrew from Gaza, the Palestinians destroyed the thousands of greenhouses Israel left for the Palestinians as a goodwill gesture to provide thousands of jobs for the residents of Gaza. Worse, Palestinians dug up many kilometers of piping from those greenhouses and underground civil infrastructure to build improvised missiles to target Israeli communities on the Gaza border, converting plowshares into swords, as it were. It created a state of continual traumatic stress disorder that continues for tens if not hundreds of thousands of Israeli civilians, as Hamas’ range and accuracy of the missiles provided to Hamas has improved every year. This is in addition to the innocent Gazans who suffer retaliation on their doorsteps because Palestinian terrorists deliberately fire their rockets from Palestinian neighborhoods, a war crime by anyone’s definition. What about those European nations that said they would have Israel’s back if missiles from Gaza were directed against Israeli civilians?
Over 1,000 missiles were shot from Gaza into Israel within the first six months after disengagement when Gaza was under Palestinian Authority control, the PA being the supposedly moderate peace partner. With the support of American progressives, those nations vociferously condemned Israeli retaliation, ignoring the disgraceful use of human shields.
When Israel tightened the borders into Gaza, not allowing dual-purpose materials to enter, materials that are used to build missiles and underground tunnels, the progressives called Gaza the world’s largest outdoor prison. Leaving out context became a device to advance an anti-Zionism agenda. Using images of injured Palestinian children who were cynically placed in harm’s way for public relations points to demonize Israel became the standard. In 2007, a Hamas coup ended the PA presence in Gaza, and Israel now had an army of terror on its border for the foreseeable future, creating a long War of Attrition.

Fast forward, 15 years – the War of Attrition endured four significant kinetic wars in 2008, 2012, 2014 and 2021 fought between Israel and Hamas. That is not counting the continuing incendiary balloon attacks terrorizing Israeli border communities or the accompanying Hamas-controlled riots that feature live fire, Molotov cocktails and rocks, with Palestinian civilians placed between Israeli troops and the terrorists. This month, an Israeli border police officer died of his wounds after Palestinian terrorists targeted him, evoking celebration not only in Gaza but more ominously in the West Bank (Judea and Samaria).

So why doesn’t Israel just conquer the West Bank and eliminate Hamas, ending the Gazan War of Attrition?

Some say that is precisely what they should do. But most Israeli security and military experts strongly resist this temptation, saying the result will be a continuing nightmare, even worse than the status quo. Israel does not want to be responsible for the lives of millions of Gazans, most of whom despise Israel and are full of antisemitism. Coexistence is not part of their vocabulary.

What about handing it over to the Palestinian Authority?

Let’s start with the unpopularity of the PA among Palestinians in both Gaza and the West Bank. Corruption, stealing hundreds of millions of dollars of international aid for their personal benefit, is an excellent place to begin. Despite claiming their pure Islamist virtues, Hamas is a corrupt entity, ruling by fear and intimidation.

Even if Israel gave the keys to Gaza to the PA, the jihadists in their midst would continually undermine their rule, with perpetual civil war a likely result. The unrest would also incite the West Bank to rise up. As it is now, the secret reason that the West Bank remains in PA control is the intelligence and cooperation Israel gives to the PA security forces to suppress Hamas.

So how about giving Gaza back to Egypt, and let them deal with their Arab brethren? Egyptian President Abdel Fattah al-Sisi and any right-thinking Egyptian leader says no-thank-you.

This brings us back to Hamas. Can they change their spots, transforming from jihadists whose charter not only calls for the destruction of Israel but is a blatantly antisemitic manifesto? Like their Iranian patron, their Islamist ideals outweigh the economic benefits of compromise. The carrot and stick approach has not worked. Hamas, if they choose, could transform Gaza into Dubai in a decade, raising all Palestinian economic prospects while having complete autonomy. But they have no interest.

They are willing to wait for as long as it takes to wear out Israel, i.e., attrition, as their best path to conquer and extinguish the Jewish state. The lesson they learned from America’s withdrawal from Afghanistan and Israel’s withdrawal from Lebanon and Gaza is that both Israel and America will withdraw or collapse over time. Making the lives of Israelis miserable with repeated wars is their prescription for success. And they know that they have a patron in Iran who can open up a multi-front war against Israel from the north, sending 150,000 missiles throughout the state.

Israel is left with a perpetual, never-ending War of Attrition. There is a continual low-grade conflict terrorizing the Israeli population on the Gaza border with intermittent escalations, sometimes turning into full-scale war. With no other recourse, Israel “mows the grass” every few years to degrade the Gazan arsenal, buying some time before the War of Attrition begins anew. Doing the same thing over and over again is insanity and certainly not sustainable for the long term.

What are the alternatives?
1. A full-scale war to eliminate Hamas with Israel taking over Gaza. Very unlikely.

2. A full-scale war that decimates Hamas but leaves it in power, lengthening the time until the next war.

3. A full-scale war and handing the keys to the current PA. The result may be even more chaotic and destabilize the West Bank.

4. Responding with overwhelming retaliation for every Hamas or Palestinian Islamic Jihad attack rocket attack, using the Powell doctrine of disproportionate use of force. It might work if not for the international community and the current US administration putting Israel upon the ICC docket for war crimes. There is a different standard for Israel and the rest of the world. According to The New York Times, the US mistakenly killed seven civilians to prevent an ISIS bomber from targeting Kabul airport. It turns out there probably wasn’t an ISIS attempt at all. Just imagine the international uproar if Israel killed seven Gazan children and the target wasn’t even real.

5. Waiting for a new and non-corrupt PA leadership to work together to hand Gaza over to their control. That could take generations, if not centuries.

6. Former Mossad chief Ephraim Halevy recommends dialogue with Hamas, reaching a long-term ceasefire. That will only happen if the jihadist leopard changes its spots.

7. Foreign Minister Yair Lapid “proposes a new vision for Gaza”: economics for quiet. That has been tried again and again. Hamas has a Sunni Jihadist ideology and economics along won’t change the situation.

8. The default answer is to continue to mow the grass, the status quo. Not very satisfying or perhaps sustainable, but the default position seems to be the only choice.

The US withdrawal from Afghanistan has energized the Palestinians of all stripes, making them even more resistant to ending the Gazan War of Attrition. Further American withdrawals from Syria and Iraq will only reinforce the Islamist belief that a Western-oriented Israel will also collapse over time.

According to an article by Dan Diker and Khaled Abu Toameh, “The Taliban’s Palestinian Partners: Implications for the Middle East Peace Process”: Following the Taliban takeover, the Palestinian Authority issued a statement that compared the US withdrawal to the Palestinian-Israeli conflict…. Palestinian sympathy and support for the Taliban have far-reaching implications for the Palestinian-Israeli peace process. The Islamists, according to their understanding, have humiliated the Americans, making it impossible for the PA to agree to any US peace proposal that would require any Palestinian concessions. If the PLO’s ruling Fatah faction were to align with moderate Arab regimes that oppose Hamas and Taliban-style Islamism and that have signed peace agreements with Israel, they would be perceived by the Palestinian public as weak, pro-Zionist, and pro-American.”

The American withdrawal will reverberate throughout the Middle East, weakening allies and empowering jihadists who will be the ones who determine how long Israel’s War of Attrition will last. But the American withdrawal’s implications and consequences for how the Palestinians will react are under-appreciated and may not even be on the radar of American foreign policy thinkers. That is a blind spot and a danger to American national security interests going forward, not to mention Israel. But it is Israel that has a front-row seat as Iran tries to encircle Israel and create a ring of deterrence to prevent Israel from striking the Iranian nuclear weapon program.