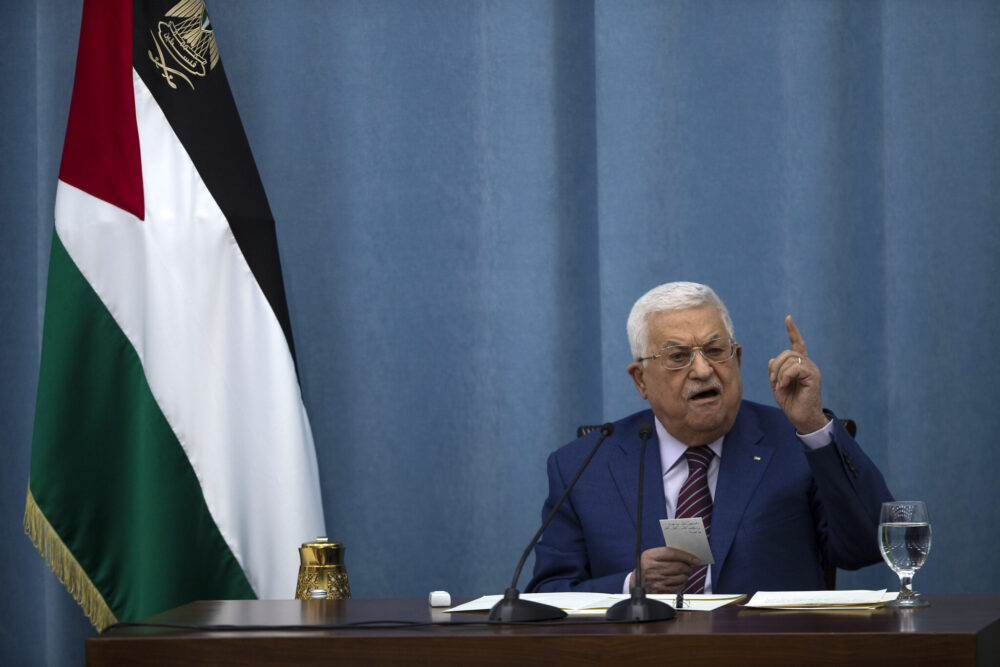 Published in the December 13, 2021 issue of The Jerusalem Report.

This fall, six Palestinian terrorists escaped from an Israeli prison. While the attention was focused on recapturing the prisoners and assigning blame, what was missed was an opportunity to gain some deeper insights into what contemporary Palestinian Arab society thinks about the conflict and people who murder civilians for a greater purpose.

Palestinians profoundly believe in the justice of their cause and their right to allthe land, from the river to the sea. They are zealous about maintaining the right of every descendant of a refugee to return to Israel. To Israelis across the political spectrum, except for the minuscule number who want a binational state, this is a complete non-starter, as it would lead to the demographic destruction of a Jewish state and the exodus of Jews who would fear for their lives. Over time, attitudes can change, compromises can be made, but today’s Palestinian viewpoint should not be underestimated.

This November, I spoke with Fatah leaders who told me they are willing to wait out Israel. The Palestinian Authority is ready to live in two states or one binational state. They believe Israelis will have themselves to blame for theoutcome because demography is on their side. If Israelis continue on their current path, the Fatah leaders said Palestinians would resist. Israel will have to choose between “bloodshed” or peace with PA President Mahmoud Abbas (Abu Mazen). They shared with me the new Palestinian strategy, a public relations campaign to change America’s public perception of Palestinians. The motto is Freedom, Dignity, and Equality, something Americans can relate to.

A sustainable peace with the Palestinians must be based on their people and their leaders as they are, not as they are imagined through progressive, intersectional eyes. Those who genuinely believe in a two-state-for-two-peoples solution that will not endanger Israel must deal with the facts in an unbiased manner.

The Palestinians have simply not prepared their people for painful compromises needed to accept a Jewish state without a right of return and sign an end of conflict agreement ending all future claims. This will be especially difficult because progressive American advocates defend Palestinian demands with a “woke” zeal akin to an evangelical religion, with the Israelis as the devil and the Palestinians as perpetual victims. For this crowd, it is all about the settlements. It is easier to portray Israel as the bully, avoiding the inconvenient truth that for too many Palestinians, the long-term crusade is to end the Jewish state, one step at a time.

President Biden says a two-state solution is the only path for Israelis and Palestinians. But is that a two-state solution as America and most Israelis see it, or does it mean something very different – the way Palestinians see it? Pressuring Israel to publicly accept America’s interpretation of two states while not acknowledging that the PA and Hamas have a completely different goalis the prelude to a bait-and-switch.

In actuality, the Oslo Accords do not demand a two-state solution. Two states are not mentioned in the document. Oslo allows Israel and the Palestinians to negotiate for one, two, three states, or a confederation, whatever is agreed upon by the parties themselves. This is according to my conversations with Alan Baker, one of the Israeli lawyers negotiating the Oslo Accords.

The Biden administration’s reported behind-the-scenes effort to urge the Palestinians to move towards a unity government, hoping this would yield some stability for the PA and Hamas through economic rehabilitation, again misses the point. The US thinks Abbas is the legitimate leader, but the Palestinian people have no confidence in him because of endemic corruption and no elections on the horizon. An Arab Middle East bureau chief told me this week that Abbas is deeply unpopular with the Palestinian people, with 2021 the nadir of his popularity. He has made many mistakes, including recanting on hispromise for elections after polling showed him trailing his rival Hamas.

So, instead of focusing on the sensationalism of the escape, the more instructive story was the Palestinian leadership’s response to the escape and the capture of the terrorists. Let’s be clear; these were not Robin Hood criminals deserving sympathy. They were cold-blooded killers targeting civilians, with their goal to end the Jewish State by terror. Some belonged to radical Islamist groups like Hamas and Palestinian Islamic Jihad, while others belonged to Palestinian Authority President Mahmoud Abbas’s Fatah party, which at times works behind the scenes with Israel to prevent Hamas from taking over the West Bank, yet also applauds and eulogies terrorists as martyrs.

Abbas’s PLO referred to the terrorists who had escaped as “the best Palestinianyouth who sacrificed their lives for the sake of their homeland and their people.” The “moderate” leader referred to the killers of civilians as “prisoners of war.” Freedom fighters, they were not. Abbas’s Fatah party, which dominates the PLO said, “the Israeli government (in capturing the escapees) bears full responsibility for these war crimes (in arresting them) or harming the lives of our heroic prisoners. “

In an interview with JNS, Dr. Anat Berko, an expert on Palestinian terrorists, said these Palestinian prisoners in Israeli jails “don’t express remorse, there’s no potential of rehabilitating them because, from their perspective, they didn’t do anything wrong or forbidden. Their society empowers them for what they did… they don’t see incarceration as a blow to their status, as criminal prisoners do, but as something that reinforces their status in the eyes of society- something for which they receive recognition as future leaders.”

An example is Marwan Barghouti, who would likely win the next Palestinian election. On the positive side, he was once considered relatively moderate. On the negative side, his popularity is primarily due to his serving five life sentences for complicity in the murder of Israelis, becoming a national hero. Abbas’s number two, Mahmoud Al-Aloul, another leading contender to replace him when he departs from the scene, called the Palestinian terrorists a “beloved people” that Palestinians are “proud of them all.”

So many decisions in the Middle East are based on a Western perspective that undermines our ability to achieve results or simply lower the flames. We project how we think and act with Middle East societies, which are tribal and clan-oriented. The same words heard by Israelis and Palestinians are understood differently.

And what Palestinians say in English to us and Arabic to each other are often night and day. The Arabic language can have four different meanings for one word. It allows for ambiguity and leads to misunderstandings with Israelis and Americans whose international agreements are meant to be clearly understood by each party.

This leads to misconceived analysis and decisions. Whether we are talking about how best to give humanitarian aid for Gaza without it falling into the hands of Hamas, a two-state solution, or how Palestinians respond to American appeasement, we expect Palestinian leadership and society to interpret our actions as we would if we were in their place.

Like much of the Middle East, Palestinians think collectively, as tribes and clans, less attached to the nation-states introduced into the region just over a hundred years ago by European colonial powers. Secular in the Muslim world means something very different; the PA is not secular in the Western sense as misunderstood by both Republican and Democratic administrations. Secular PLO, PA, and Fatah are profoundly influenced by Islam, as are the lives of most Palestinians. Minimizing the religious dimension of the Israeli-Palestinian conflict explains why presidents of both parties for the last half-century who have offered peace plans have failed time and again.

The American intention to reopen the Palestinian consulate in Jerusalem, or find a way around American law (Taylor Force) to transfer funds to support the PA financially, also misreads the situation and will have the unintended consequence of hardening Palestinian positions. In the Middle East, it is interpreted as weakness.

The Taylor Force Act prohibits funding of the Palestinian Authority that supports terrorists and rewards their families. A new bill submitted by progressive members of Congress highlights either naivete based on projecting a Western perspective on the Palestinians or perhaps real animosity to Israel. It repeats the bromides of the Israeli occupation being the source of the Israeli-Palestinian conflict without mentioning the role of Palestinians. progressive Congressman Ro Khanna said, “I believe there is space in American politics to be a pro-Israel, pro-peace, and human rights progressive. This bill is a vision for that.” Hidden in the legislation is conditioning US foreign aid to Israel, a euphemism to end support of Israel if it does not meet the progressive agenda. And yes, it includes boycotting Israeli goods from disputed territories as a first step to boycotting all Israeli goods.

Meanwhile, his fellow woke activists showed their true colors by forcing the removal of Biden’s commitment to replenish the defensive Iron Dome anti-missile system, which saves both Israeli and Palestinian lives. This proposed progressive legislation ignores the actual obstacles- Palestinian Authority and Hamas corruption, the demand for an unconditional return of descendants of refugees that would end the Jewish state, the security requirement of strategic depth, and Israel’s legitimate right to negotiate for disputed territory.

It is time for America to see Palestinians as they are, not as their Progressive supporters romanticize them. Especially if you ever want to make progress for peace while ensuring Israel’s security, a vital US national security interest. It would begin with educating their young people that a Jewish state must be accepted without nuance in all of its Arabic meanings if they are to achieve their goal of an independent state.