Combating BDS: Now is the time to support and enforce the US Senate’s legislation 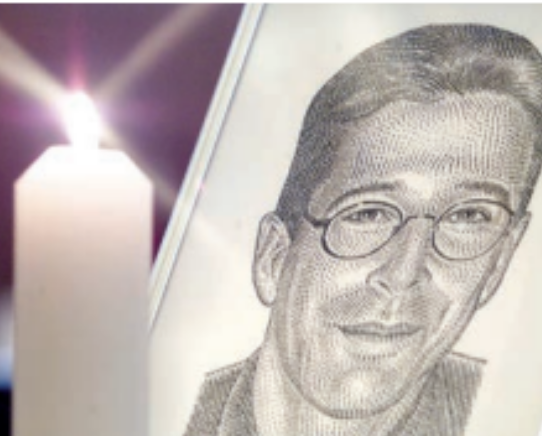 Published in the February 7, 2022 edition of the Jerusalem Report.

Photo: A portrait of Wall Street Journal reporter Daniel Pearl stands with a candle at the altar of St. Brides Church on Fleet Street in London, March 2002., SOURCE: Ian Waldie/Reuters

Two years ago, the Senate passed the Combating BDS Act by a 77-23 vote. According to Prof. Eugene Kontorovich at George Mason University’s Antonin Scalia School of Law, “The bill was quite modest,” intending to protect anti-BDS legislation in states where progressive critics challenged it. Those laws, he said, “prohibit(ed) state contracts with, and investment in, companies that boycott Israel-connected firms. The federal Combating BDS Act would simply declare that the state laws don’t violate US foreign policy.” Seventy percent of states now have some form of anti-BDS legislation.

Even today, when political polarization is at its zenith, over 80% of Americans consider anti-Zionism a form of antisemitism. One of the most pernicious forms of antisemitism is the BDS (Boycott, Divestment, and Sanctions) movement, whose true agenda is eliminating Israel in its entirety and whose adherents openly intimidate Jewish people, especially university students.

In the aftermath of the 2021 American off-year election, where progressive ascendancy was dealt a blow in the Virginia and New Jersey gubernatorial elections, centrist Democrats are asking themselves if now is the time tocome out from the long shadow of the radical progressives. Can they now be less fearful of being successfully challenged in Democratic primaries by far-left Squad-supported candidates? Will moderate Democrats now feel more confident voting for anti-BDS legislation or openly supporting Israel?

I thought of this when I spoke to students at Florida International University, and South Carolina Senator Tim Scott brought up the issue of BDS in the wake of the November election. The students asked me to speak about why America should support Israel, and whether American foreign aid, in general, is a worthwhile investment. They also wanted to know the reasons for the rise of antisemitism in the guise of anti-Zionism, and why the BDS movement has gained steam, especially on college campuses.

A positive harbinger for a return to moderation in Congress was the reintroduction in June of the Combating BDS Act of 2021 by Democratic Senator Joe Manchin of West Virginia and Republican Senator Marco Rubio of Florida.

The bill, they said, “would increase protections that allow for state and local governments in America to create laws that restrict contracting with firms that knowingly engage in commerce-related or investment-related BDSactivities that are aimed at Israel, as well as persons doing business in Israel or Israeli-controlled territories.”

According to Senator Rubio, BDS “seeks to delegitimize the Jewish State of Israel by inflicting economic damage and starve it of commerce…The boycott, divestment, and sanctions movement is the single most destructive campaign of economic warfare facing the Jewish state… Amid a rising tide of antisemitism, it is critical that we stand shoulder to shoulder with our closest democratic ally in the Middle East.”

Senator Manchin said this “bipartisan Combating BDS Act is a step toward ensuring individual states have the right to pass laws that prevent business transactions with the anti-Israeli BDS movement… I urge my colleagues on both sides of the aisle to join this bipartisan legislation to support individual states and our valued ally, Israel.”

“States cannot outlaw boycotts of companies that support the Israeli government any more than they could outlaw boycotts of companies that supported apartheid South Africa,” the ACLU’s national legal director wrote indefense of BDS. That not-so-subtle reference tipped his hand that the argument has more to do with delegitimizing Israel than upholding constitutional law, as it falsely compares Israel with an apartheid state.

According to Kontorovich, “anti-BDS laws do not infringe on speech. They don’t regulate speech at all. That’s exactly what the ACLU had said when states passed similar anti-boycott laws that weren’t about Israel. The First Amendment protects speech, not conduct… A boycott or divestment doesn’t constitute a message in itself, meaning refusing to do business isn’t speech. That’s what a federal court held… when it threw out an ACLU challengeto Arkansas’s anti-BDS law. The ACLU and pro-boycott crowd’s goal is to bring boycotts of Israel into the political mainstream.”

The underlying debate is the far-left contention that anti-Zionism and its hatchet, BDS, are not antisemitic. They inappropriately claim the right to define Judaism as only a religion, not a nationality, allowing them to assert anti-Zionism and BDS are not Jew-hatred. It follows for them that Zionists are land thieves, and for the woke mind, immoral and evil. Yet even the general secretary of the UN, a notoriously anti-Zionist organization whose Human Rights Council and General Assembly disproportionality target Israel, says anti-Zionism is antisemitism. The ACLU case has always been a specious argument, that Nazis and far-left anti-Zionists have the right to protest loudly and voraciously against Israel’s right to exist or in support of the BDS as protected by the First Amendment.

The hypocrisy of BDS advocates is evident when they claim that challenging their right to boycott violates their first amendment rights, but they scream foul when anti-BDS protesters boycott the BDS boycotters.

In fact, no one is questioning their right to boycott personally. This is a false dispute about free speech, as the state laws do not limit it. They only restrict commercial transactions with taxpayer dollars. Most state anti-BDS laws simply demand that taxpayer dollars cannot be used to boycott Israel. BDS boycotters cannot use their position in government to undermine state law to advance their antisemitic viewpoints by boycotting Israel. Their job is tofollow the law, not subvert it for their political ideology. If the issue were anything other than Israel, the ACLU would be on the other side.

None of this is new and has a strong precedent. From the 1975 Export Administration Act to the 1976 Tax Reform Act, America made it illegal for companies to profit from the Arab boycott of Israel, the predecessor of to-day’s BDS movement. The irony is that today, some of those Arab nations enjoy commerce with Israel and have full diplomatic and people-to-people relations. Today’s BDS advocates are really an anachronism harking back to yesterday’s antisemites.

Meanwhile, the mainstream media is trying to normalize BDS. It is unconscionable that the New York Times allows the precious space ofits op-ed pages to advance the antisemitism of BDS by using the argument of dual loyalty, a traditional antisemitic slur.

“Trading their citizens’ First Amendment rights for what looks like unconditional support for a foreign government (Israel),” a recent Sun-day essay said, makes a mockery of the Times’ assertion that it does not allow anti-Jewish rhetoric on its pages. Proving the point of the Times hypocrisy was how they handled a legitimate op-ed by Senator Tom Cotton that ran afoul oftheir woke employees, even though a majority of America agreed with the writer’s viewpoint. The Times forced opinion editor James Bennett to resign and be sent into exile because it offended the progressive narrative. But no heads roll when BDS is mainstreamed. A disgrace for the Times and journalism.

According to Professor Eytan Gilboa, director of the Center for International Communication at Bar-Ilan University, The New York Times sees itself as a flag-bearer of anti-Israeliness and anti-Zionism. There are even antisemitic tendencies. “The New York Times gives an extremely wide platform to anti-Zionist positions… an approach that is considered to be antisemitism by the International Holocaust Remembrance Alliance (IHRA).”

The ACLU and its fellow travelers are also against a standing Executive Order that expanded protection for Jewish students under the Civil Rights Act, adding Jews as a protected class because BDS proponents on university campuses continually target them. If anyone’s free speech is limited, it is pro-Israel students who are shouted down in public spaces by BDS supporters, claiming it is their right of free speech to limit the speech of others. Tellingly,the ACLU does not defend the Jewish students’ right of free speech.

The executive order using the Civil Rights Act to protect Jewish students undermines the ACLU argument that claims support of BDS is not antisemitism, only anti-Zionist. For ideological reasons, they choose to ignore the speech of Jewish students. They should ask the 50% of Jewish students who hide their identity for fear of antisemitic intimidation.

BDS is anti-Zionism, or as my friend Judea Pearl calls “Zionophobia.” He is one of the world’s leading scholars on artificial intelligence, winner of the most prestigious prize for Mathematics, the Turing Medal. His passion for fighting Zionophobia received international prominence after his son Daniel Pearl was killed by Islamist extremists nearly 20 years ago, on February 1, 2002.

In the pre-Trump era, getting a large majority of politicians on both sides of the aisle to speak out against BDS was not a difficult task. However, with the rise of the radical Squad, mainstream Democrats who support Israel, protect American Jews from antisemitism, and value the US-Israel relationship have cowered in fear of being challenged by a Bernie- and Squad-supported candidate.

This was most evident in the actions of Senator Chuck Schumer. He had always proclaimed his robust support of the US-Israel relationship, but seemed to have lost his voice for anything not aligned with progressive priorities. He fearsthat AOC, the progressive firebrand, would challenge him for his Senate seat. After the thumping Democrats received in the off-year election, perhaps Schumer and some other previously outspoken supporters of the US-Israel relationship will again speak up, especially against rejoining the Iran deal, which they once opposed.

A call goes out to the Democratic Majority for Israel, an organization of centrist pro-Israel Democrats that was created in part to confront the anti-Zionist agenda of radical Democrats like Ilhan Omar, Tlaib, AOC, and Cory Bush.

Getting fellow Democrats to join with colleagues across the aisle to support anti-BDS legislation that is constitutionally sound would be a vital sign that Democrats have righted their ship in an attempt to bring back normalcy.

Whether President Biden would sign or the House would vote on anti-BDS legislation is beside the point. If the Senate can vote on the Combating BDS Act of 2021 and pass it with bipartisan support, it would be a litmus test thatthe American democracy’s pendulum swing to the far left is reversing, with moderation returning, something the American people desperately desire.