Is there a double standard for Israel and antisemitism? 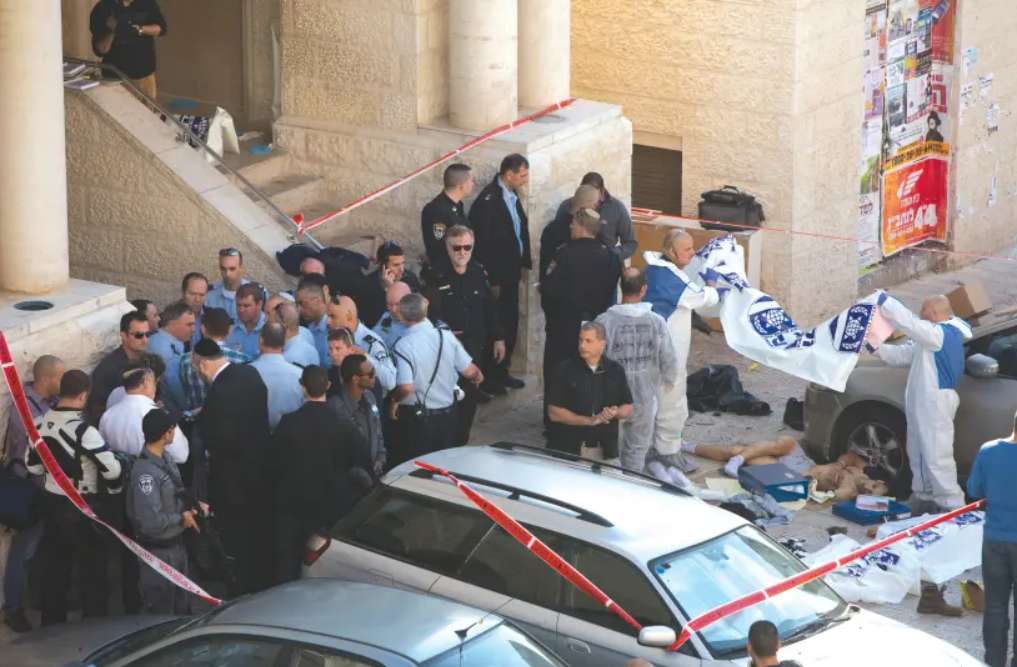 Photo: After a terrorist attack at a Jerusalem synagogue in 2014, CNN ran the story with the headline ‘4 Israelis, 2 Palestinians dead in Jerusalem,’ failing to note that the two Palestinians were the terrorists. (photo credit: YONATAN SINDEL/FLASH90)

Imagine if you opened up your social media page one morning and read a headline that says:

“Rabbi on Israeli TV says God Will Delight in the Extermination of the Evil Muslims,”

“Amnesty International Director Says We are Opposed to the Very Idea of a Palestinian State for the Arab People,”

“Israeli Leader Says He is the Flag Bearer of Zionism to Liberate the Temple Mount from Arabs,”

“Senior IDF Leader Boasts that He Can Destroy the Islamic Republic in Eight Minutes,” or

“Israeli Prime Minister Said He Would Not Agree to Even a Single Palestinian on Israeli Land.”

An outraged Western media would run these headlines as front-page stories accompanied by vitriol-filled op-eds, virtue-signaling their unanimity against the brutal Zionist racists. Of course, none of these headlines are real.

Substitute Jew for Muslim, Palestinian for Israeli or Jewish leader for Islamist and magically, the real stories receive almost no coverage. They fail to meet the approved narratives that paint Israel in the worst light.

Here are the actual news stories that did not make headline news or outrage the Western media:

• On the official PA TV, an imam said, “Allah, delight in the extermination of the evil Jews.”

• Two Israelis Were Shot in Nablus.

• Amnesty International US director Paul O’Brien makes clear: “We are opposed to the idea… [that] Israel should be preserved as a state for the Jewish people.”

• Supreme Leader Khamenei says he is “the flag bearer of Jihad to liberate Jerusalem.”

• A senior Iranian military commander boasted that the Islamic Republic could “raze the Zionist regime in less than eight minutes.”

• Abbas wants “not a single Israeli” in a future Palestinian state.

This is an exercise in exposing the double standards we have sheepishly accepted, listening to well-meaning advice that says it is more constructive not to make a stink, as it would only give more attention to the anti-Israel, Jew-hating world.

I could have listed thousands of similar examples over the last twenty-five years that portray Jews and Israel in a negative light, accepted without a meaningful investigation by journalists. If the offending words or actions are against Israelis or Jews, they are, more times than not, relegated to the back pages, if covered at all. But the analogous acts and words coming from an Israeli or Jew would garner headlines and angry rants from Christiane Amanpour, Peter Beinart, Gideon Levy, Noam Chomsky, and the rest.

Have you ever read a mainstream news report that Israel stops ten Palestinian terrorist attacks daily on average?

Now, imagine an Israeli government elevating Jews who kill Arabs to heroic status in their school systems, synagogues and media. Of course, this never happened. However, the true story that lionizes and incentivizes Palestinians with hundreds of millions of dollars per year is barely reported.

“Pay for Slay” doesn’t fit so nicely with the media’s sympathies for Palestinian Arabs, so it was ignored for years. The worse the atrocity, the more the PLO/PA pays. Palestinians don’t even try to hide this; it’s an open book relegated at best to news stories where it can be rationalized with a moral equivalence argument. As Palestinian Media Watch (PMW) reported in March 2022, the official PA daily Al-Hayat Al-Jadida, said, “We adhere to the prisoners’ cause and stand alongside them.” In other words: The PA condones and encourages terror and murder of Israelis.’ It should be a good news story, right?

When pro-Palestinian actor Mark Ruffalo tweeted on April 22 that the “Israeli Occupation Authority… targeted by design” hundreds of Palestinians at al-Aqsa, essentially claiming Israel targets civilians for no reason, no investigative reporters were investigating the claim. Any superficial research would reveal that Israeli security forces do not target Palestinians unless they are rioting and endangering people.

Now imagine the Bennett government calling for Jews to pray for revenge on those who harm Jews and Israelis, grant them victory, and end the defilement of the evil Muslims on the Temple Mount. That would have been front-page news on MSNBC, CBS, ABC, and every other media acronym that reflexively looks to slander Israel.

The actual but unreported story was a Ramadan prayer on official PA TV, “Allah, grant victory to the Jihad fighters in this land… take revenge on those who desire to harm Islam and the Muslims… Allah, have mercy on our Martyrs… release our prisoners; Allah liberates al-Aqsa Mosque from the defilement of the evil Jews.”

Where is the western media coverage?

Instead of accepting the one-sided reporting and editorialization of the news with an anti-Israel view and a disregard for attacks against religious Jews, we need to call it what it is. It’s anti-Semitism, a double standard against Israel and the Jewish people. You are not going to change the minds of the bigots, but there are a few people who do have open minds and leave their echo chamber of partisan politics for a few moments.

One person can make a difference. My friend Sander Gerber made it a personal mission to expose the Pay for Slay program. His hard work with the help of Congressional friends led to the Taylor Force Act, withholding American taxpayer funds used to incentivize Palestinian terrorism.

In this unending marathon to delegitimize Israel, we must go on the offensive to expose the out-of-context reporting, resorting to moral equivalence, highlighting stories that paint Israel in the harshest light, or omitting stories about Palestinians that paint them negatively. Yes, there are times not to respond, but they need to be in the minority. Thanks to Palestinian Media Watch for its work reporting on what the Western media chooses not to pay attention to.

I think we should follow the lead of Ilan Sinelnikov, president of Students Supporting Israel. He said that we cannot influence the conversation when we are always on the defensive. “We want to move from defense to offense.”