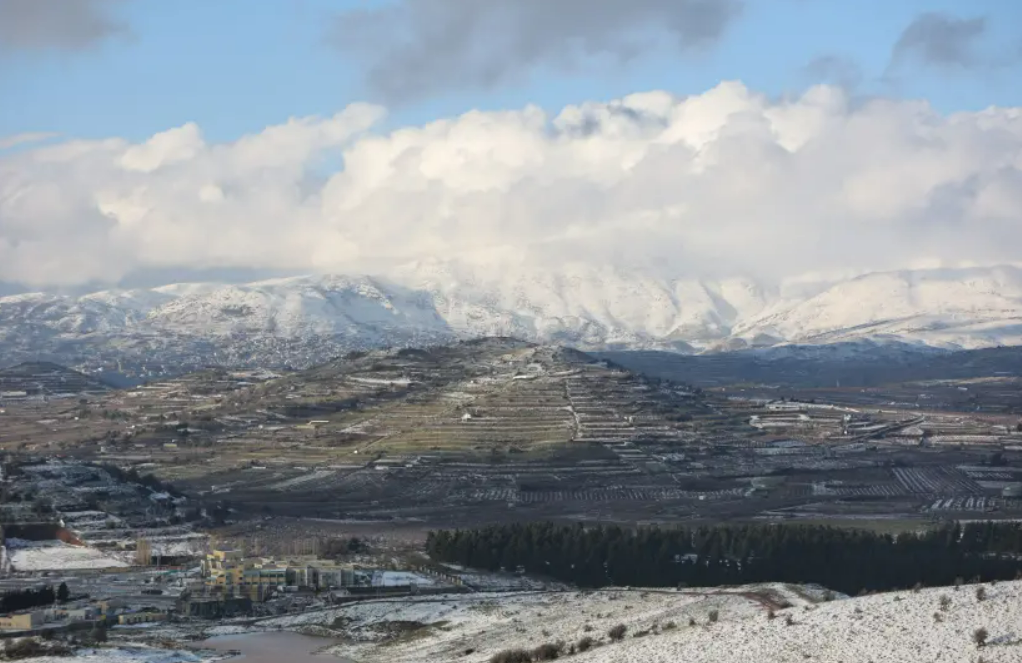 Photo: View of Mount Hermon covered with snow as it seen from the northern Golan Heights, near the border with Syria, January 20, 2021. (photo credit: MAOR KINSBURSKY/FLASH90)

Tamir Pardo, former head of the Mossad, said Israel has never defined its territory. We need to talk about what we want – a Jewish majority or a binational state. He asked: “Why do Israeli governments not define the territorial border we want? It is clear to everyone on the globe that annexation (of the West Bank) brings the Jews to a situation where they are a minority. Our politicians chose to sedate the public, thus deciding the country’s fate while escaping reality, and the clock is ticking.”

General Udi Dekel, head of the Israeli negotiating team under Ehud Olmert in Annapolis, said there are two groups. The status quo says establishing a Palestinian state would be a disaster. The other group is afraid of the demographic map where Israelis are a minority, and the main idea should be a separation between the peoples. He said 60% of Israelis think we should start separation now, including 55% of the Right. Unfortunately, no government can survive and implement what the people want.

Last October, at a ceremony promoting the Abraham Accords caucus in the Knesset, Defense Minister Benny Gantz said these agreements only materialized because Israel deferred annexing disputed areas of the West Bank (Judea and Samaria).

While true, it sidesteps one of the reasons Israel considered annexation, declaring a defensible border that incorporates the majority of Jews residing over the Green Line. With Iran in the process of fulfilling its strategic goal to surround Israel from three sides (Lebanon, Syria and Jordan), defining the borders not only has tactical but strategic significance.

Speaking to the UN last fall, President Mahmoud Abbas said demographics would inevitably impose full political rights for all on the land of historical Palestine within one state. Israel has to choose between a binational state or Israel’s complete withdrawal from Gaza, the West Bank and east Jerusalem.

Let’s leave aside Israel’s disastrous withdrawal from Gaza and the five wars that followed. Perhaps Abbas has a point, not what he meant, but maybe Israel should delineate its borders sooner rather than later.

Either now or in the near future, Israel may be able to define its security borders in cooperation with the Gulf states, especially if the Palestinians remain intransigent and Israeli-Arab interests supersede the Palestinian issue. What is for sure is that this American administration and the EU would exact a heavy price if Israel annexed a centimeter of land over the 1949 armistice line.

So, is the status quo a more dangerous option over the long term than declaring Israel’s borders?

During the Trump administration, Israel turned down the opportunity to assert its borders in exchange for diplomatic relations with the Gulf nations, Sudan and Morocco. That was a wise choice. A powerful argument can be made not to upset the status quo, especially with the Saudis on the verge of improving relations with the Jewish state.

The evolving relationships with the Sunni Arab states may, in time, afford unexpected opportunities to coordinate an Israeli delineation of borders. Not likely, you say, but nobody foresaw the Arab Winter, the Abraham Accords, or the fall of the Berlin Wall, so being prepared for unforeseen opportunities is a worthwhile exercise.

If you are a liberal Zionist, the answer to borders is clear. To this faction, boundaries should be determined to create a Jewish and democratic state that disengages from the 2.5 million Arabs who live in the West Bank and Gaza, based on the 1967 lines. Unfortunately, you cannot guarantee that Hamas will take over the West Bank or that it will remain demilitarized. Israel needs freedom of action to enter if security breaks down, to control the air, sea, and the Jordan River Valley, something no Palestinian leader would accept.

Israeli negotiator Tal Becker, who has advised Israeli governments for over 30 years, said the conflict is what makes you a Palestinian. Palestinian identity is primarily about opposition to Zionism. To Palestinians, the Abraham Accords, which acknowledge that Jews have a right to be here, conflict with their negation of Jewish national rights. Palestinian society glorifies a narrative even if they don’t believe it.

Palestinian-Israeli journalist Khaled Abu Toameh said if Palestinians have an election, they will vote for the guy who wants to destroy Israel. He went on to say that if you watch Palestinian TV for five minutes, you would like to grab an ax and kill a Jew. I can’t find one Palestinian willing to talk about concessions. Palestinian education starts at home; Jews don’t belong here, Jews stole the land, and Palestine is compensation for the Holocaust.

This is what Europeans and many American foreign policy experts purposely ignore, and why there is no partner to mutually agree to a defensible Israeli border for the foreseeable future.

If you are someone who prioritizes Israel’s security above all else, the answer is more complex. The security-oriented group prioritizes Israel’s defensible borders and demographics but realizes you need to remain in good standing with your allies, posing unique challenges. Explaining why security considerations must dictate final boundaries should be self-evident; however, making the case to nations that have swallowed the Palestinian narrative makes this an uphill fight.

Donald Trump’s Peace to Prosperity Plan attempted to prioritize Israeli security concerns but was never taken seriously, despite its attempt to solve long-standing differences with innovative ideas. This was because the messenger was Donald Trump, persona non grata. Yet, it did have many creative ideas trying to bridge the divide between Israeli security needs while calling for a Palestinian state, something maximalists on both sides oppose.

﻿So the question is, is it worthwhile for Israel to begin the arduous process of bringing together its security, intelligence, and defense experts to come to a consensus on what Israel’s minimum territorial requirements are, if and when a government believes it is time to have what every other nation in the world has – defined borders.