Skip to content
Israel The Biden Administration The Persian Gulf

Is I2U2 the next step for Saudi-Israel ties? 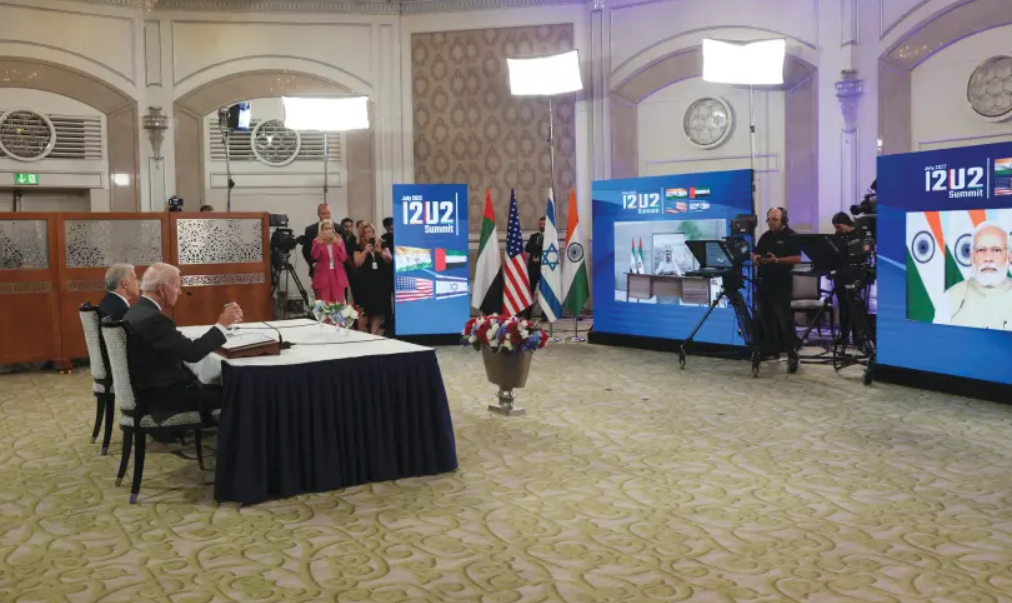 Photo: US President Joe Biden and Prime Minister Yair Lapid attend the first virtual meeting of the I2U2 group with leaders of India and the United Arab Emirates, in Jerusalem, in July. (photo credit: EVELYN HOCKSTEIN/REUTERS)

Published in the December 5, 2022 issue of the Jerusalem Post.

Speaking at Yale University and Columbia University last week, I was asked several questions about the Abraham Accords: its sustainability in light of the new right-wing Israeli government and who are the most likely nations to join next. The questions were well thought out, highlighting the potential of the Accords for regional stability and setting a new paradigm that begins to erode the Palestinian veto on Israeli-Arab relations.

An equally game-changing geopolitical initiative, the I2U2 agreement, an Indo-Abrahamic Alliance, needed to be added to the student’s radar. In July 2022, Israel, India and the UAE, under the leadership of the United States, issued a statement on joint investments and new initiatives in water, energy, transportation, space, health and food security. With India surrounded by adversaries to the north and east, Pakistan and China, and soon to be the most populous nation on earth, its influence and importance in regional affairs will only grow.

According to Middle East expert, Jonathan Spyer, “With the US recalibrating its regional commitment… (there is a) need for the establishment of structures enabling long-term strategic cooperation between regional powers. The formal establishment of diplomatic relations between Israel and the United Arab Emirates in August 2020 paved the way for an emergent three-way alliance between Jerusalem, Abu Dhabi and New Delhi.”

Ultimately, this new economic arrangement can evolve into a regional security order that could join with the Quadrilateral Security Dialogue (Quad) to confront the rising powers of China and Iran. Quad members include – Australia, India, Japan and the US, with the common denominator being India. The goal of Quad is to limit Chinese maritime actions in the South China Sea. This policy objective applies to an assertive Iran in the Persian Gulf and the Straits of Hormuz, something important to the US, India, the Saudis, Israel and the UAE.

The Saudis feel threatened by Iran and would benefit from joining new partnerships. When I met with the Kingdom’s diplomatic and foreign ministry leaders a few weeks back, they had no ideological problem developing deeper ties with Israel. However, they perceive themselves as the leader of the Muslim world, with special responsibility as the custodian of the holy cities of Mecca and Medina.

They believe, as the leading voice in the Muslim world, they cannot get ahead of public opinion that strongly sympathizes with their Palestinian Arab cousins and so for the time being will demur from joining the Abraham Accords. Mind you, there is little love lost between the Saudis and Palestinians.

US-led initiatives could bridge the divide, furthering our primary interest in Middle East stability. At this time, a better vehicle for the Saudis than the Abraham Accords is to consider the advantages of joining an I2U2 plus agreement to advance their interests. Another possibility is to encourage the Saudis to join the Eastern Mediterranean Energy Forum, an alliance of Israel, Egypt, France, Greece, Italy, Cyprus, Jordan and the Palestinian Authority.

The cover for MBS is better here because the PA is part of this economic agreement. Once the Saudis cross the Israeli Rubicon with another deal or two, the threshold to fully commit to the Abraham Accords will be a lower step to climb when the time is ripe.

According to The New York Times, “analysts say the I2U2 bolsters the United States’ efforts to contain China’s influence in Asia and the Middle East, reassure Middle Eastern leaders of Washington’s commitment to the region and establish better ties between its allies in different parts of the world. The initiative is considered a companion project to the Quad, a four-way partnership joining Australia, India, Japan and the United States that was founded partly in response to growing Chinese influence in the Pacific. For Israel, I2U2 is another forum to shore up opposition to Iran and strengthen the landmark diplomatic pact it sealed with the UAE. in 2020.” The Saudis should not miss out on this opportunity.

The I2U2 and energy forum initiative can expand American influence from the Mediterranean to South Asia and restore some of our tarnished reputation as an unreliable ally after the Afghanistan withdrawal. Our adversaries will perceive these partnerships as strength, the only thing respected in this region.

While the Abraham Accords were spurred by a common fear of an expansionist Iran, the I2U2, in conjunction with the Quad agreement, confronts the threat of a hegemonic China. Remember, China signed a 25-year $400 billion (NIS 1.35 trillion) strategic deal with Iran.

The US must grasp this opportunity to bring all its allied regional players through economic, security and intelligence cooperation. A significant change occurred in January 2021, when Israel was allowed to join the US Middle East-based CENTCOM, which includes nations with which it does not have diplomatic relations, Saudi Arabia, Iraq, Kuwait, Oman, Pakistan, Qatar and Lebanon. The US-led plan for a joint air defense system with Israel and its Arab neighbors against the Iranian missile and drone threat should be the next step.

Focus on the possibilities

America should focus on the possible. The path forward is to ignore the John Kerrys of the world, who said there is no possibility Arab nations will make peace with Israel until untying the Gordian knot of the conflict. The Biden administration may be less than enthusiastic about adding to prime minister Netanyahu’s foreign policy achievements but it would be a shame to forgo the opportunities to forge stabilizing alliances in the region out of spite.

The next step is for the US to bring the Saudis, Indians, UAE, Israel, and other Asian and Mediterranean nations closer together as a bulwark against China and Iran. It will be magnitudes of order easier than dealing with the Palestinians, whom Abba Eban chided in the 1970s for never missing an opportunity to miss an opportunity.