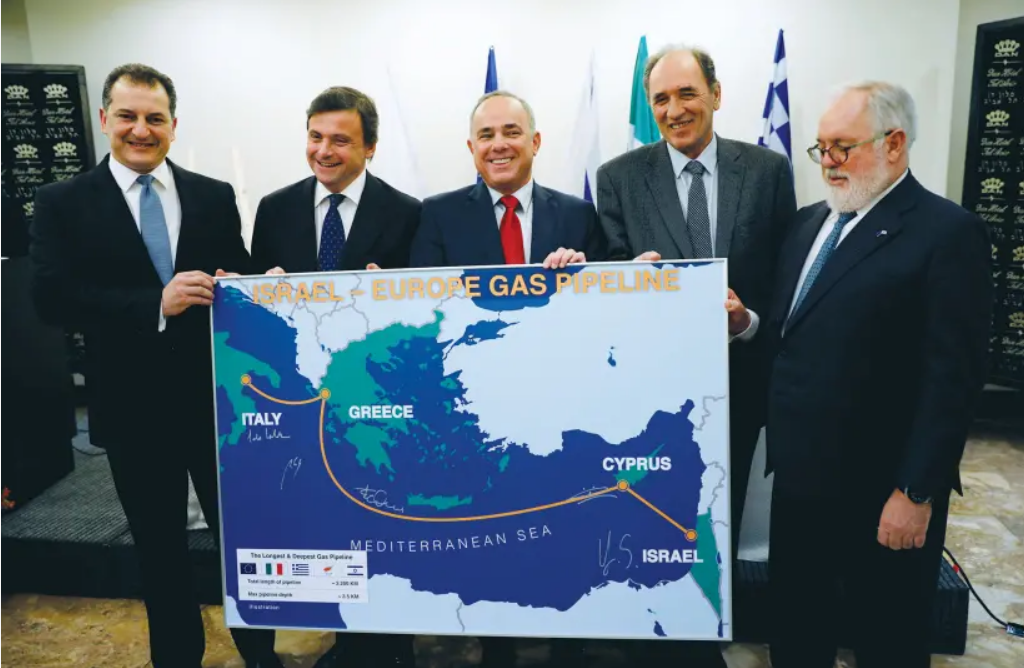 Photo: Then-Energy Minister Yuval Steinitz (center) with his counterparts from Greece, Cyprus and the EU, and Italy’s minister of economic development, in Tel Aviv in 2017.(photo credit: AMIR COHEN/REUTERS)

Much of the recent focus on energy in the Middle East relates to Israel’s newfound energy independence with its significant gas reserves in the Mediterranean. In addition, its new energy alliances with Greece, Cyprus, Italy and Egypt have the added benefit of strengthening Israel’s diplomatic relationships and security standing. That is the good news.

Now the bad news. What is underappreciated as a significant security challenge is how the West’s desire to become fossil fuel independent is strengthening the hand of authoritarian regimes in the region like Iran and Russia, while weakening the influence of Western democracies. A liberal democracy is only as strong as its economic strength. The best way to maintain American influence is for the US to be perceived as economically strong and engaged in the Middle East.

If the West is true to its word, it will need to have a massive transfer of wealth to poorer nations to help them eventually curtail their use of fossil fuels.

The price tag is staggering. According to a Wall Street Journal article: “At a July global climate gathering in London, South African Environment Minister Barbara Creecy presented the world’s wealthiest countries with a bill: more than $750 billion annually to pay for poorer nations to shift away from fossil fuels and protect themselves from global warming. Without poorer countries on board, the world stands little chance of preventing catastrophic climate change, say many climate scientists.”

A wealth transfer of that magnitude on an annual basis won’t happen or would bankrupt those countries. Not to mention the blowback from the Western citizenry who would never accept sky-high energy bills indefinitely. This winter’s energy price outlook could threaten economic recoveries throughout the world.

All the while, America’s competitors like China will be using fossil fuels including coal to produce solar panels to sell to Western nations. China and much of the world promise carbon neutrality by 2050 or 2060, but you have to be utopian to believe they will achieve their promises as their carbon appetites grow.

On a geopolitical level, an economically emboldened Russia would feel more secure challenging the West. It could consider additional expansion into other parts of eastern Ukraine, and find itself the only reliable power broker in the Middle East. America’s and Israel’s interests do not coincide with Russia’s, a friend to Iran, Turkey and Syria, all Israeli adversaries.

While the West commits hari-kari by ending fracking and expecting solar and wind energy to replace natural gas and oil without damaging their economies, the Russians, Iranians, and the Gulf states will be more than happy to extort inflated energy prices and fill their coffers. China and India’s rapidly increasing demand for fossil fuels will make the West’s reduction seem insignificant. This is the reality. And the damage to our economy, prestige, and ability to influence other nations to advance our security interests will be severely diminished. Especially if the West gives a long-term pass for the use of fossil fuels by China, India, Russia, and the rest of the non-Western world.

Here is the politically incorrect path – if you are genuinely interested in climate change and not virtue signaling by buying a Tesla. If you want to reduce man’s carbon footprint, the best and most reliable method would be nuclear power, which has become a safe source of energy despite its toxic name. The taboo against nuclear power should end if you believe man-made climate change is a real threat to the planet. It is much safer than in the past and can be a sustainable energy source with almost no carbon footprint.

If you are ambitious and want to attack a primary source of CO 2 equivalents, target agriculture and man’s insatiable desire for animal protein. Create a moon-launch type of program to make animal meat in laboratories that would be indistinguishable from meat from slaughtered animals. Dramatically reducing the methane footprint would be more important than eliminating every car, plane, bus and train that burns fossil fuels.

As Walter Mead Russell wrote, the “assumption is that aggressively backing the transition from fossil fuels to renewables will strengthen the administration’s hand at home and abroad… the real problem is that the green agenda as currently conceived is an effective machine for undermining the economic and political power of the democratic world and boosting the influence of precisely the authoritarian powers President Biden has made it his mission to oppose. By artificially depressing fossil fuel production and investment in the democratic world faster than renewables and other fuels can fill the gap, Biden policy promotes a multiyear, multitrillion-dollar windfall for countries like Russia, Iran, and Saudi Arabia… Climate policy that is geopolitically and economically unsustainable will inevitably fail.”

America’s pleas begging the Gulf states to increase fossil fuel production have fallen on deaf ears, as they are not anxious to do any favors for a Biden administration that prefers their nemesis Iran. As for the Europeans, according to a WSJ editorial, “European leaders have handicapped themselves on energy [as] Putin takes advantage of democratic Europe’s self-defeating climate policies, but is raising energy prices, harming consumers and industry, and is now empowering the bullies in the Kremlin.. [they should] classify nuclear as a sustainable energy source… lower[ing] the financing costs for nuclear projects.”

We need to acknowledge that our energy policy targeted against climate change can undermine our security interests. This happens when we ask too much of renewables too soon and absolve the worst fossil fuel abusers like China and Russia. If you really care about climate change and the environment, think nuclear in addition to solar and wind.