Iran Belligerency and a US Withdrawal Are Realigning the Middle East 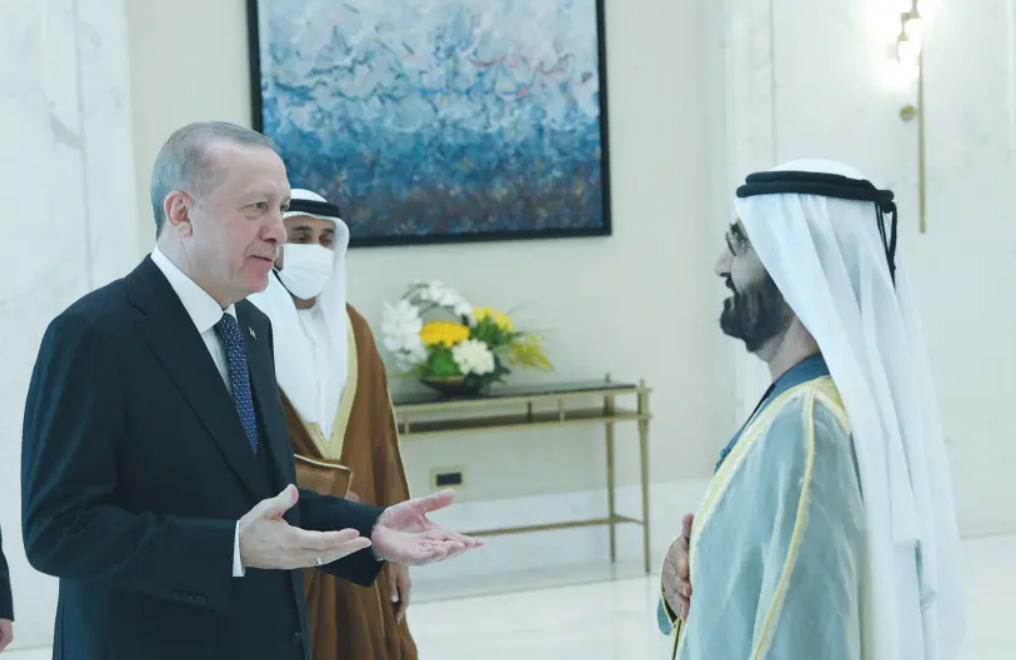 Just a few years ago, President Erdogan’s anti-Israel rhetoric and support of its enemies was in full swing. Sunnis in the Gulf, at least publicly, would have nothing to do with Israel’s economy or diplomatic initiatives. In Egypt, the cold peace remained very cold, with little reciprocity to Israeli outreach for deeper relations, except in the shared interests of security and intelligence. Despite welcoming Jewish visitors, Morocco kept at arm’s length from the Jewish state. If an Israeli aircraft flew over Saudi Arabia, the Saudis would have scrambled their F-16 fighters to confront an enemy.

Fast forward to 2022. After two decades of Turkish animosity to Israel, Turkish strongman Recep Tayyip Erdogan, under self-inflicted severe economic pressure that has weakened his hold on power, has reached out to Israel and the Sunni Gulf states. The Saudis and the UAE had been furious for his support of the Muslim Brotherhood and Qatar.

This March, Erdogan’s chief adviser, Ibrahim Kalin, is coming to Israel, while the Israeli president will be paying a visit to Ankara to meet with Erdogan in the first step toward rapprochement. In Cairo, Egyptian President Sisi telegraphed a very public message to Israel by going out of his way in front of an international delegation to warmly greet an Israeli energy minister in a wheelchair.

And the previously unimaginable has happened in the Gulf over the last few years. Warm interpersonal, economic and security ties between Israel, the UAE, and Bahrain are commonplace.

According to Israel’s former national security adviser and head of its National Security Council Meir Ben-Shabbat, “we are now seeing the start of a reorganization of the camps in the Middle East… the pragmatic Sunni camp – consisting of Saudi Arabia, the UAE, and other Gulf states (excluding Qatar) – is establishing a partnership with Turkey and Qatar – which will also incorporate Israel… This new reorganization blurs the traditional dividing lines between the camps.”

The combination of America’s withdrawal from engagement in the Middle East, and the rise of Iranian self-confidence for hegemony, has forced strange bedfellows to sleep together. Even though the Gulf states have significant economic relationships with their neighbor Iran that hovers over them like a crouching tiger, they have taken the risk to align with Israel for their preservation, knowing who the leaders of Iran really are.

While American administrations have misunderstood the true nature of the Islamic Republic – projecting western sensibilities on a revolutionary jihadist mindset – Iran’s neighbors know that Shi’ite jihadism is a threat to their very existence. They are aware that US appeasement strengthens Iran, and only an uprising by its beleaguered people will bring security to the region. Unfortunately, America is doing the exact opposite in its nuclear negotiation, perpetuating instability in the region by offering sanctions relief that encourages the supreme leader and his Revolutionary Guard henchmen to continue stealing their people’s assets and abusing their human rights.

You wouldn’t know it from reading the mainstream press but economic sanctions were working until US President Biden, encouraged by his chief Iran negotiator Robert Malley, stopped enforcing sanctions on Iranian oil shipments to China and allowed civilian nuclear work to resume. According to a leaked Iranian Revolutionary Guards document, Iranian “society is in a state of explosion,” President Ebrahim Raisi has “shaken public trust,” inflation is between 86-268%, and there have been hundreds of civil protests across the country against the regime.

But just like in 2009, when then-US president Barack Obama abandoned the Iranian people who were rising against the mullahs in their Green Revolution, Biden is giving an economic and diplomatic lifeline to the Supreme Leader so that he can support terrorism, missile development and ally with American adversaries China and Russia.

The US has been clueless about Iran for decades, and only the Israeli-Palestinian conflict has been more misinterpreted. Much of the problem is that the executive branch seems not to learn from past mistakes. The Biden administration has slow-walked the most critical change in the Middle East in decades, the Abraham Accords, which in part have been midwifed by Iranian aggression and American appeasement.

So is a new Middle East of shared interests on the horizon? Will it dissolve if the external threat of Iran decreases?

With America’s sanctions relief just around the corner in exchange for a pause in Iran’s nuclear program, which will guarantee an Iranian industrial-sized nuclear program in less than ten years, the new cooperative security alignment is unlikely to fade. Iran will now have the funds to support its expansionism and threaten its neighbors even more.

Instead of appeasing Iran, a forward-thinking American administration would realize that strength, not weakness wins the day in the Middle East.

What makes the Abraham Accords more sustainable is that they are a people-to-people engagement, not the cold diplomatic peace of Israel with Egypt and Jordan. Suppose Egypt and Jordan, for their regimes’ economic and personal survival, decide they need to get closer to the Jewish state. In that case, Israel should require the quid pro quo to be a Jordanian and Egyptian government public relations investment in helping their peoples to accept Israel.

This is an American security interest. Unfortunately, today, hating Jews and Israel is the norm among their peoples. US economic investment in Egypt and Jordan in exchange for a warmer relationship with Israel would serve the interest of the US.

Erdogan’s economic desperation is another American opportunity to not only nudge them back into the NATO orbit but to encourage them to return to a more positive relationship with Israel and distance them from Hamas and the other terrorist actors. This is already happening. This month, Turkey’s Hurriyet daily reported that Hamas “members holding military ranks will not remain in Turkey” and “will not receive military assistance.”

This would take sophisticated diplomacy that Secretary Blinken is more than capable of if only his marching orders were not married to the failed Obama legacy, the Joint Comprehensive Plan of Action.

The Middle East is changing rapidly, and an engaged America can guide it to advance its national security interests. If not, the next decade will be the beginning of nuclear proliferation throughout the Middle East in response to an unrestrained Iran.