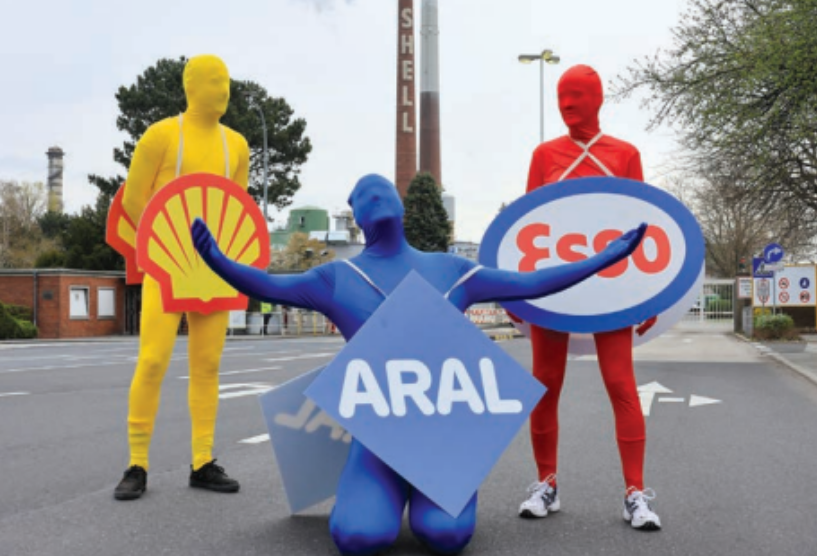 Photo: Activists in morph suits protest against Russian energy imports by oil companies Shell,
Aral and Esso after the Russian invasion of Ukraine, in front of the Rhineland oil refinery
in Cologne, Germany on April 4. Source: Wolfgang Rattay/Reuters

Published in the May 16, 2022 issue of the Jerusalem Report.

The West’s march to cleaner renewable energy and decarbonization has hit a Russian speed bump in Ukraine.

With the world’s energy security in a precarious state, US President Joe Biden and the West face a progressive backlash in their quest for more oil and gas to replace sanctioned Russian fossil fuels. Even with rising energy prices and security issues increasing the demand for renewables, the world will remain dependent on conventional energy sources for years to come.

The tension between climate activists and politicians trying to avoid an energy-created recession due to the invasion of Ukraine is palpable. There is a political call from environmentalists to ignore the economic fallout from the sanctions placed on the Russian Federation and use this as an opportunity to push even faster toward renewable sources of energy. But they seem oblivious to how difficult and damaging that energy transition will be if their mandates have unrealistic timelines and we turn off the spigot of fossil fuels too soon.

Simultaneously, governments worldwide are searching to replace Russia’s fossil fuels. Nations like Germany became addicted to cheap Russian oil and gas for their energy needs. Germany is especially culpable; it ignored theominous harbinger of what Putin could do back in 2014 when Russia annexed Crimea and extended its sphere of influence into Eastern Ukraine. Chancellor Angela Merkel enthusiastically proceeded with the Nord Stream 2 pipe-line, making Germany even more dependent on Russia for generations to come.

Americans and Europeans have chosen to suffocate the development of their fossil fuel resources, even though authoritarians will be more than happy to supply the fossil fuels we choose not to extract. The net effect is the sameamount of climate damage as if the West drilled itself. The only difference is that America and Europe have outsourced their energy and national security interests to the authoritarians.

“The war in Ukraine has emphasized how leaving European and American fossil fuels in the ground can put the West at the will of dictators, increasing the risk of atrocities, war or even the use of weapons of mass destruction,”said Jason De Sena Trennert, CEO of Strategas.

Unacknowledged by the American media and climate activists was that even before the Ukrainian invasion, Europeans were considering classifying natural gas and nuclear energy as climate-friendly choices. When Europe burns natural gas from Qatar and Russia, it still contributes to climate change while also sup-porting terror. Wouldn’t it be better if fellow democracies supplied it until we transition to cleaner choices?

Another underappreciated fact is that we cannot be independent of fossil fuels for reasons other than energy. Oil and gas will still be needed for many things, from asphalt to diapers to fertilizers that won’t be replaced by alternateoptions anytime soon.

After the Arab oil embargo of the 1970s, when the US and the West learned the painful price of adversaries using energy as a weapon, energy independence became the holy grail for American security. However, our energy experts said it was a fantasy for the US to become energy independent ever again. They said America would become even more reliant on imported fossil fuels from problematic regimes.

Well, the experts were mistaken. Not only would the US produce much more fossil fuels, but it would become the world’s leading producer of oil and natural gas. Unfortunately, timing and politics got in the way. America’s holy grail of energy independence met the headwinds of climate and environmental policy, whose advocates claim that carbon in our atmosphere is our most essential security issue.

While there is little doubt about the health and pollution risk created by coal, the dirtiest fossil fuel, the anti-fossil fuel advocates threw the baby out with the bathwater, categorizing all fossil fuels as enemies of the people. They lobbied to significantly curtail not only coal and oil but much cleaner natural gas.

The dirty little secret is that even if America and the West became 100% carbon neutral, it would make little difference. For the next 25 years and beyond, India, China, and the developing world will continue to use coal and oil onan ever-increasing scale as their economies advance. Politics distorted what should have been a dispassionate debate on the issue.

If climate activists genuinely wanted the cleanest, most reliable, and most abundant energy source, they would have been advocates for developing the next phase of safer nuclear energy. However, excuse the phrase, nuclear energy is radioactive to the wind and solar crowd, even if it is the best path to a carbon-neutral world. Don’t let the facts get in the way of the religious-like devotion to favored renewables when the best choice may be nuclear. Renewables are essential for the environment and the climate, but reliable fossil fuel sources will still be critical to the world for the next half-century.

A recent WSJ editorial and news story on climate change and energy independence highlighted America’s contradictory policies concerning energy security. “President Biden’s pledge to boost US liquefied natural gas exports to Europe marks a further retreat from his hardline stance against fossil fuels,” it wrote. However, Biden’s national climate adviser contradicted him, saying, “the administration does not want to invest in natural gas.”

Even Elon Musk, the iconic guru of renewable energy, says we need to pump more gas due to the profound security concerns of Russian expansionism.

According to oil expert Daniel Yergin, “there’s a recognition now that shale… is a real geopolitical asset.” Energy investors know they take risks, he said, but “what company would want to invest (billions) in building energy infrastructure in an anti-fossil fuel environment? The reality today is the US doesn’t have enough LNG export capacity to replace the 170 billion cubic meters that Russia sends Europe every year. It can take four or five years to get, or not get, a federal permit for a pipeline that can be built (in as little as) six to nine months.”

What we need is a comprehensive policy to become less dependent on fossil fuels while at the same time creating a realistic strategic timeline to replace fossil fuels and invest in renewables, with sensible assessments of costs and benefits.

As just one example to highlight the administration’s misguided Mideast energy policies in January, just before the Russian invasion, the administration withdrew its support of the Israeli, Greek, and Cypriot EastMed pipeline that would have brought natural gas directly to Europe. It would have provided approximately 10% of their energy needs for years to come.

Before the invasion, Biden’s senior adviser for energy, Amos Hochstein, said he would be “extremely uncomfortable with the US supporting” EastMed. “Why would we build a fossil fuel pipeline when our entire policy is to support… going green?” Over-reliance on renewable energy sources before they are fullymature and are economically sustainable is a self-created national and international security nightmare for the free world.

A few weeks after Putin launched the war against Ukraine, the Biden administration reached out to human rights abuser Venezuela for fossil fuels and is willing to sign a nuclear agreement with Iran to get Iranian oil on the market. America pleaded with the much disparaged Gulf states to produce more fossil fuels. However, they still had the bitter taste of Biden ignoring their legitimate security concerns related to Iranian-directed missiles hitting their homelands.

Biden removed Patriot missiles at the beginning of his term in 2021 before recently sending them back in the false hope of appeasing them to pump more gas and oil. Too little, too late. The now infamous Biden calls that werenot answered by MBS and MBK should not have been a surprise. This is a region with one democracy, the rest authoritarian, but Biden has chosen the most malign and dangerous authoritarian, the Supreme Leader, to indulge.

Energy policy is not binary. We can have significant investment in renewables while acknowledging that they will not replace fossil fuels in the short term. Man-made climate change will continue even if the US and its allies commit security hara-kiri, and rely on authoritarians. A too optimistic timeline for renewables will hurt the American economy and make us less secure in confronting a hostile world that wants to harm the US.

America, Europe, and its democratic allies need to produce more clean natural gas and build safer nuclear energy facilities. Fossil funnels for western democracies need to originate from reliable democratic or Western-leaningsources. The global energy supply must not be held hostage to the closure of the straits of Hormuz, Bab el Mandeb, or the Suez Canal.

Taking this a step further, I have advocated that the US and the West must identify its most vital industries that rely on importing commodities and natural resources that are dependent on bad actors. China is a problematic supplier. If you want to be Green, you need to find reliable mineral suppliers for your solar panels and lithium batteries from a nation that will not usethem as a political weapon.

“America’s foreign-policy thinkers will increasingly have to take into account the geopolitical importance of Chile’s copper and Australia’s lithium, not just Saudi Arabia’s oil,” wrote Gerald Seib. “The US and China will competeto access the giant cobalt reserves of the distant Democratic Republic of Congo. Domestically, traditional policy debates over tax and regulatory advantages given to the oil-and-gas industry will give way to arguments over what kind of help to give companies that mine critical minerals and produce batteries, solar panels, and wind turbines.”

America needs a national plan for energy and commodity independence. Start with a bipartisan national commission for a government-private partnership. The goal is to find the right balance to realistically provide our energy needs today with cleaner fossil fuels and safer nuclear energy in the future. At the same time, the US can transition and invest in renewables to protect our environment and prioritize our national security interests so we are not susceptible to extortion from authoritarians.