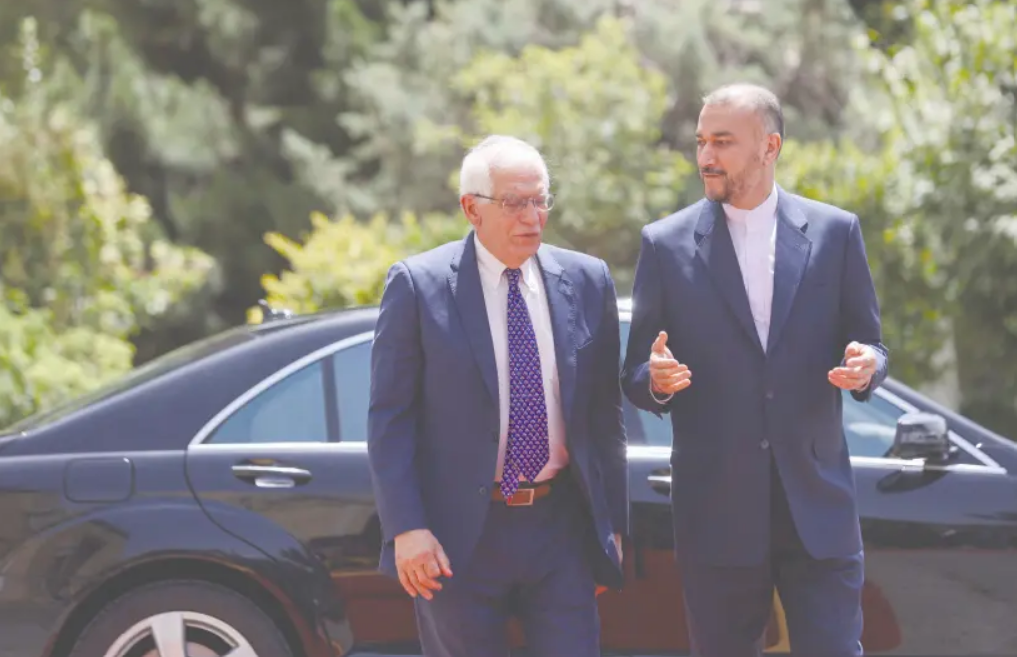 For seemingly the thousandth time, the United States is returning to negotiations with the Islamic Republic of Iran to resurrect the flawed nuclear deal (JCPOA) of 2015, without insisting on any meaningful extensions of the sunset provisions delaying their nuclear program. The announcement made in Tehran by European Union Foreign Policy Chief Josep Borrell said the talks would resume after a three-month hiatus. The US is officially not in the negotiating room because the Iranians refuse to sit with the Americans. If that alone doesn’t tell you who dictates the terms of these negotiations, nothing will.

According to Iranian PressTV, Iranian Foreign Minister Hossein Amir-abdollahian said, “We are going to break the stalemate… Iran would not stand by… the threatening moves of the Zionist regime, including its destructive measures in the talks about the Islamic Republic’s peaceful nuclear program.” Iran’s enrichment to 60% says loud and clear that this is anything but a peaceful program, since there are no civilian needs at that level.

What about the supposed fatwa by the supreme leader that they will never have nuclear weapons. Our negotiators know full well that the Islamic Republic’s leaders routinely practice Taqayyah, religiously sanctioned dissimulation, i.e. deception, concealment and lying.

The knowledge Iran has gained since 2015 and its clandestine work, most notably in digging an even deeper nuclear centrifuge facility near the Natanz nuclear site, has made a return to the agreement without significant changes diplomatic malfeasance of the highest order.

It endangers American national security interests to keep begging the Iranians to accept hundreds of billions of dollars in sanctions relief for the promise of delaying their nuclear weapons program for just a few more years. The message to the rest of the world, particularly our allies, is that the US may have the world’s most feared military but will allow itself to be manipulated over and over by a rogue state and just beg for more of the same.

So, will President Biden end sanctions on Iran for a slight delay in the Iranian nuclear weapons program, which is what a return to the JCPOA means? In other words, the unspoken agreement with Iran is ending nuclear sanctions and not enforcing non-nuclear sanctions.

There will be no Iranian commitment to abide by the current rules restraining their ballistic missile development. There will be no guarantee preventing Iran from putting the final touches on nuclear weapons in a few years, when the current sunset limitations expire. And no end to their attacks against Israelis, Sunnis and anyone else that stands in their way. Watch out Jordan, you are next on their list of targets to add to Iraq, Lebanon, Syria and Yemen.

They already have the knowledge to enrich to 90% weapons-grade uranium, have the ballistic missiles to hit everywhere in Israel and the Sunni capitals, and have been granted the ability in the JCPOA to continue research and development on centrifuges that have no civilian use. They only lack the ability to weaponize and compartmentalize nuclear material to place on a nuclear warhead, with estimates for this being in as little as 18 months.

Iran is playing hardball not only because the US gave up leverage, but because its revolutionary Islamist ideology controls its people in a brutal authoritarian state. The administration inherited leverage in the negotiations from the maximum sanctions, which were devastating to the Iranian economy.

Unfortunately, we chose appeasement and a lack of will to continue sanctions enforcement until Iran renegotiated the terms of the deal. Biden has minimized Iran’s economic burden by looking the other way and allowing it to sell more fossil fuels to China and ignoring its cooperation with Russia to help it violate Western-imposed sanctions.

America talks a good game about pivoting to confront China, but the Biden administration has chosen not to impose secondary sanctions on China for buying Iranian oil or retaliating against the owners of tankers transporting Iranian oil to China. If we did, we could regain leverage in the JCPOA talks and demand a permanent end to the sunset restrictions. Instead, we are allowing Iran to prop up the IRGC economically.

The Biden team has little will to stop Iran from becoming a nuclear threshold state, which puts pressure on Israel to act to prevent a Shiite Islamist bomb. The Biden plan to unite Israel and the Arab states in defense cooperation against Iran is a good idea. But it is also unmistakable evidence that the administration is committed to returning to a weakened JCPOA that will allow Iran to be a threshold nuclear state in a short time, abandoning the longer and stronger agreement they promised the American electorate.

Will the administration enforce the sanctions on Iran’s other malevolent behavior, or will they minimize enforcement, as they do now with nuclear-related sanctions? Partial sanction relief for a 25-year pause in their nuclear program is the deal we should be demanding. Full sanctions relief for a permanent nuclear weapons program end is the goal.

If the Biden administration tries to tie the hands of future presidents’ sanctions, it should be resisted by the Senate. Only if the Administration sends an updated JCPOA to the Senate as a treaty would it be constitutionally acceptable for permanent sanctions relief. The majority of the Senate and the American people in 2015 were against the JCPOA and today there is no difference.

When will we end the kowtowing to a third-rate extremist Islamist dictatorship?