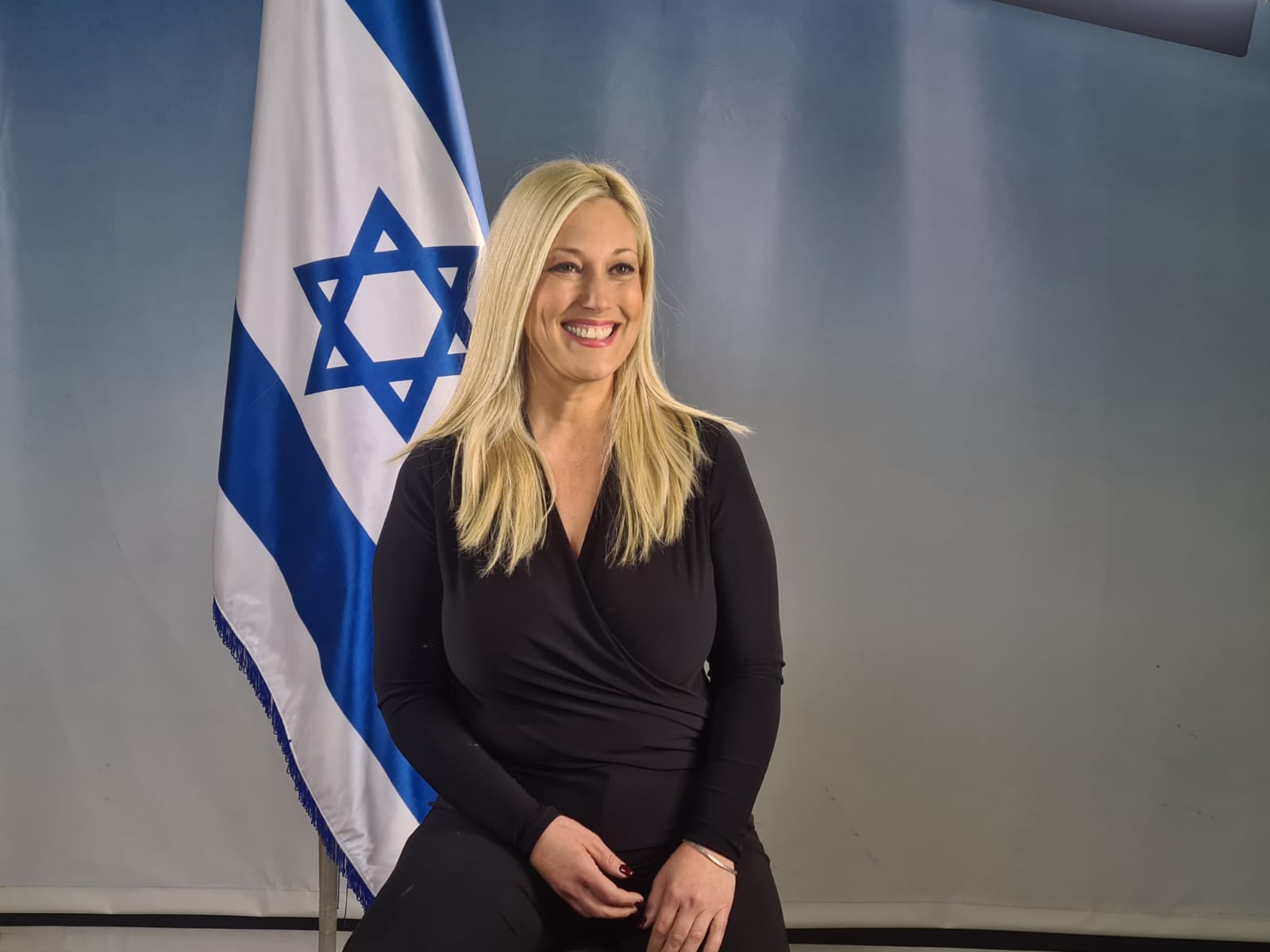 Published in the July 11, 2022 issue of the Jerusalem Report.

I recently had the opportunity to interview a rising star in Israeli politics, Blue and White’s MK Ruth Wasserman Lande, who is co-chair of the Abraham Accords caucus in the Knesset. Lande, who grew up in South Africa, studied at Harvard’s Kennedy School of Government for its MA program and started its Israel Caucus. Fluent in Arabic, she has served as a diplomat in Egypt and lived for ten years in the mixed Israeli-Arab city of Lod. Her perspectives from the political center and her close relationship with the chairman of her party, Benny Gantz, who could be a kingmaker in the next coalition, give her unique insights into Israeli society and policy.

What do you think about the opposition Likud party voting against the Judea and Samaria Emergency legislation just to bring down the government?

This is not the first time the opposition has voted against a good bill to try to spite and break the coalition. It is a crucial bill because it is far more critical than just recognizing Israeli jurisdiction over the West Bank; there are practical implications. One of the implications is that anyone living there cannot be brought to justice without this law. For example, if someone from the West Bank does something against the law in Jerusalem or Tel Aviv, they could run away to Judea and Samaria and not be arrested, even for murder or theft. Second, (it affects Israel’s ability to incarcerate) Palestinian terrorists (as there are no Israeli prisons in the West Bank).

How long will the coalition survive?

It will hold until it breaks. It is fragile, and there are a lot of conflicting views from the left and the right. I am from the Blue and White party, which is in the center. We tried as hard as possible to stabilize the coalition. It was tough because the coalition had very conflicting views, and the opposition did not make it any easier. The coalition will not last forever, but we overcame many obstacles. We not only held on for a year, but we have passed significant laws and moved the nation forward with some important initiatives for Israel’s Jewish and Arab populations.

Could Gantz could join with Netanyahu if he is offered first in the premiership rotation?

Benny has clearly said he won’t join Benyamin Netanyahu. The Netanyahu government divided the people. This coalition is not perfect, but it tried to heal the sores fostered by the last government.

You lived for 10 years in Lod’s mixed Israeli-Arab community. During last year’s Guardian of the Walls war, there was Arab violence targeting Jews that seemed to startle the Jewish population. Do you think most Palestinian citizens of Israel believe Israel has a right to exist as a Jewish state?

I want to believe that most Arab citizens of Israel do believe in the continuation of the existence of Israel. But I must say there is a growing concern that Arab Israelis are moving away from the mainstream. This is not entirely the Arab sector’s or the government’s fault, but a combination of both. The former government has sown a lot of hatred, division, and antagonism between Israel’s Arab and Jewish citizens. It did very little to create more cohesiveness in Israel.

Furthermore, the Likud-led government weakened the police and law enforcement agencies, which did not take care of the violence prevalent in the last decade in the Arab sector. Some of this violence has also leaked

into more nationalistic Arab violence. The blame is also on many Israeli Arab leaders who have fostered a hatred of Jews.

A big-budget decision #922 for the Arab sector was driven by the Likud government between 2016-20. Unfortunately, it wasn’t implemented well because the capacity of the Israeli Arab governments was relatively poor, combined with the bureaucratic obstacles in the Israeli ministries. But a significant budget was allocated for infrastructure, education, transportation, employment opportunities, everything specifically for the Arab sector.

This coalition prioritized tackling the violence in the Arab streets. We allocated 2.4 billion shekels to combat crime and violence in the Arab street, including fighting the crime families in Israel. Decades of accumulation of Arab weapons is a significant problem everywhere in Israel, particularly in the Negev. The coalition allocated 30 billion shekels to the Arab sector, but the opposition hypocritically claims it is selling the country to the Arabs. The goal is to bridge gaps to bring Arab society closer to the mainstream in Israel. Mansour Abbas is the first-ever Arab leader to join an Israeli coalition; he deserves credit, which is unimportant.

In 2018, the Knesset passed Israel’s version of ‘pay for slay’ – a law stopping the PA’s payment of hundreds of millions of dollars to families of slain Palestinian terrorists. Last year, Gantz transferred money to the PA that it was legally required to withhold despite Abbas’s continued payments to terrorists. Do you believe this was a mistake even if monies subsidized jailed terrorists and their families, or should Israel work around the law to keep the PA from collapsing?

It is dreadful and inhuman to pay salaries to terrorists. Yet, the alternative is also terrible if it causes the Palestinian Authority to collapse, which will breed chaos because of a lack of security cooperation. We need the PA’s cooperation to keep the lid on violence and work with the PA to protect Jewish citizens in the WB. It is a complex situation and far from perfect. Tax money is required to keep the PA afloat, while at the same time, Israel needs to force the PA to make changes regarding incentivizing terrorism.

Israel is set to agree to new security arrangements allowing Egypt to transfer control of two islands in the Straits of Tiran to Saudi Arabia. Will the Saudis publicly acknowledge this agreement with Israel?

Let’s start with the significance of those two islands. The fact that they were involved in two (Israeli-Egyptian) wars, blocking Israel’s shipping, shows their geo-strategic importance. It is Israel that has to provide the green light for transferring sovereignty (adding) strategic value for Israel in the region.

Because of the platform created by the Abraham Accords, the situation is currently ripe to leverage that agreement in a very positive way. Another issue is alleviating the crisis between the US and Saudi Arabia, which was extremely bad until recently because of the Iran-US nuclear talks. The US administration is moving a little away from Iran, which has calmed the Saudis and created a better environment for the US and Saudi (relationship).

It is not only the fly-over zone over Saudi Arabia that Israel will be granted, which was an accomplishment in and within itself. More meaningful is that it is a preliminary understanding between Israel and Saudi Arabia to build upon. It is not official or on the record, but it certainly prepares the ground for more interaction.

The Saudi Embassy in the US told me that it is alright if smaller countries join the Abraham Accords, but since Saudi Arabia is the leader of the Arab world and is more conservative, it needs to go slowly and must take into account the situation of the Palestinians. Your response?

The Palestinian-Israeli conflict has been narrated to the Arab street in their school books, syllabi, newspapers, and official rhetoric for seven decades. It is impossible to expect that this anti-Israel narrative will evaporate into thin air one and a half years after the signing of the Abraham Accords. (However), owing to the Abraham Accords, positive things are being done in the UAE and even in Egypt, creating a more sophisticated narrative that is not the simplistic “Israel is killing Palestinians narrative.” But this will take time.

The conflict is of critical importance but should not hold hostage the development of relations between Israel and its Arab neighbors. That is not to say we should not move forward on Israeli-Palestinian understanding. I would like to remind you that while the peace process is stagnant, Israeli security and economic relations with the PA continue. Waiting for the Palestinians was the failed paradigm, and the Abraham Accords changed the paradigm.

What are your thoughts about the Arab states of the Abraham Accords siding with the Palestinian narrative regarding the violence on the Temple Mount and blaming Israel for the incitement?

I disagree with that statement because I closely followed the Arab media and official reports. The harshest comments were from Jordan, which has been weakened with the infringement of Iranian-supported militia in Syria moving toward the Jordanian-Syrian border. Furthermore, Hamas is trying to “kidnap” the ownership of the Islamic holy places from Jordan. Hamas is trying to create a new narrative in which it is the protector (of Al-Haram al-Sharif) by instigating and inciting Muslims who simply want to pray peacefully. Hamas is encouraging a group of incited Palestinian youth who showed little respect for the mosque by playing soccer and throwing Molotov cocktails from Islam’s third holiest site. The weak Jordanians brought a very harsh statement (against Israel) concerning the issues of the Temple Mount to try and make up for this vacuum of ownership and their weakened position.

Secondly, one needs to highlight that the UAE and Egypt went to Jordan to calm Jordan’s leadership to become softer regarding issues pertaining to the violence in Temple Mount. In the past, Egypt was always the one that needed to be calmed down. Suddenly Egypt and UAE went to Jordan, a new dynamic that needs to be highlighted. This is the (result of) the positive impact of the Abraham Accords. Hamas caused a lot of issues for our security forces. However, this problem was well understood by the leadership in Egypt, the UAE, and Bahrain, who are well aware of the destructive steps taken by Hamas.

Although the security relationship with Egypt is strong, anti-Israel sentiment among the populace is very high. What can be done to address this problem?

Egyptian-Israeli relations had been cold for over 40 years. One of the things that I always point out is the impact the Abraham Accords had on improving the relationship (with Israel), and the Accords took the onus off the Egyptian Republic’s shoulders. Since the Abraham Accords, anti-Semitism in official newspapers has been almost completely removed. Slowly, slowly, this anti-Semitic wording is being removed from the syllabus and textbooks, which is even more critical as a deep-rooted issue. The Arab street was taught to hate Israel over many, many decades. There needs to be a will to change this to warm relations.

The Egyptians were fed an anti-Israel message for decades because it was involved in wars and bloodshed with Israel. This cannot change immediately, but some positive things have been happening on the ground since the signing of the Abraham Accords. An example in the past year is the “Musalsalaat” the yearly TV series during Ramadan. People stayed home and watched these dramatic series; every year, it was about the Israeli spies. This was not the case this year, which is a big thing because this is indoctrination.

Fewer than half of American Jews under 30 say they are very or somewhat emotionally attached to Israel. With each generation, it seems the relationship grows weaker. While at Harvard, you started the Israel Caucus. American campuses are hotbeds of BDS, and Jewish kids on campus are intimidated. What can Israel do to help make young Jewish Americans not think of Zionism being racism?