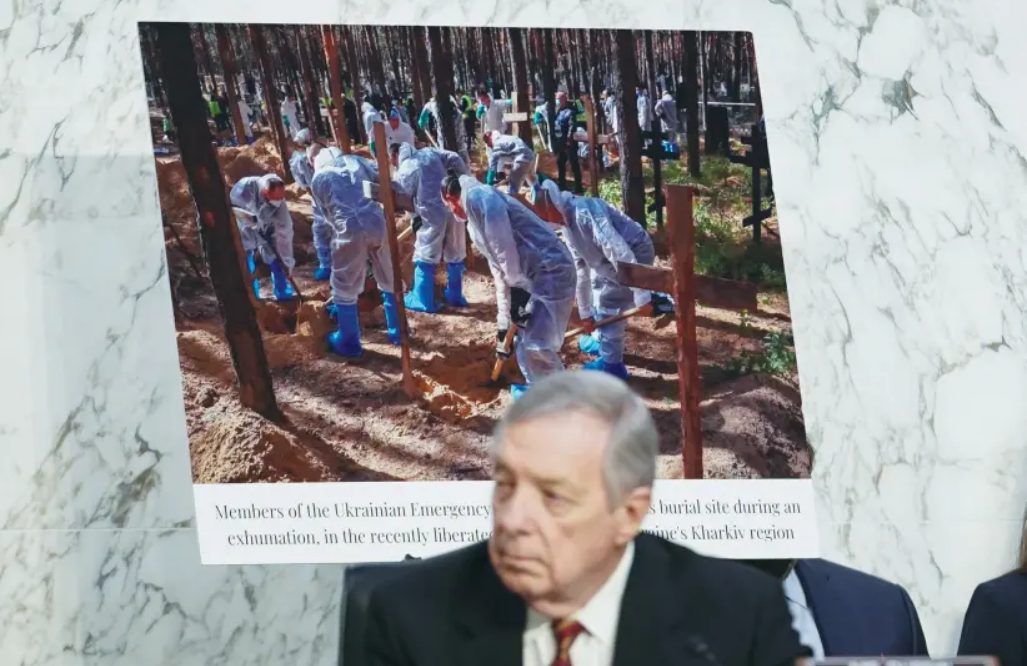 Photo: US Senate Judiciary Committee Chairman Dick Durbin (D-IL) sits alongside a photo from the war in Ukraine during a committee hearing, last month. According to ‘The New York Times,’ Durbin has said Saudi Arabia wants Russia to win the war. (photo credit: REUTERS)

Rarely has the chain of broken expectations and perceived insults and humiliations been greater than they are now; there’s almost no trust and absolutely no mutual respect,” said ambassador Aaron David Miller of the Carnegie Endowment for International Peace.

US President Joe Biden has made no secret of his disdain for Saudi Arabia, infamously pledging to make them a pariah state.

The Saudi war in Yemen, with its devastating civilian toll, the Khashoggi murder, and rebuffing of the US request to produce more oil to lower American gasoline prices before the midterm election, has motivated many in Congress, especially on the Democratic side, to call for an arms embargo and a permanent downgrading of relations.

The president and his Democrat allies viewed the OPEC+ decision to lower oil production as purely a Saudi decision to punish the president. They also saw it entirely through the prism of Ukraine as support for American adversary Russian President Vladamir Putin, who needs high energy prices to continue to fund his brutal war.

The Saudis also want oil prices not to plunge because of the financial commitments for the Crown Prince’s Vision 2030.

The Saudis are sophisticated watchers of the American political scene. They should have seen the uproar coming, so they could have chosen a better approach and timing to manage the relationship they want and need for their security.

According to The New York Times, Senator Durbin, the second-ranking Democrat in the Senate, went so far as to say that Saudi Arabia wanted Russia to win the war in Ukraine.

“Let’s be very candid about this. It’s Putin and Saudi Arabia against the United States.” The president added, “There’s going to be some consequences for what they’ve done with Russia.”

But you need to ask yourself if this was over the top. Has the administration ever used the same strong language with the Supreme Leader of Iran, whose nation has led our State Department’s list of state sponsors of terror for decades?

Khaled Abu Toameh wrote for the Gatestone Institute that “Arabs no longer see the US as a strategic ally or even as a friend. This is excellent news for the mullahs in Iran and their terrorist proxies in the Middle East, including Hezbollah, Hamas, Palestinian Islamic Jihad, and the Houthis in Yemen.”

Words have lasting consequences. And the Saudis will be needed for America’s future security, economic, and energy interests. Even if the Biden administration had not suffocated investment in fracking with over-regulation, the Saudis would remain, for the foreseeable future, the only nation with enough excess capacity to pump a significant amount of oil in a short amount of time to stabilize energy markets.

Fossil fuels are far from being replaced by green energy. Even if we are energy independent, our domestic economy needs a stable global economy to prosper, which requires Saudi oil for the foreseeable future.

The James Baker Institute at Rice University said, “Choosing when to exercise that spare capacity – and when to refuse – gives the Saudi regime influence over the popularity of a presidential administration. As long as oil prices remain a major risk factor in US politics, future US administrations would be advised to tread carefully with the Kingdom.

Likewise, for Saudi Arabia, caution is warranted. But when Saudi actions deliberately inflate US gasoline prices at election time, such actions are perceived as hostile political interference and can undermine and damage bilateral relations.”

Here is the quid pro quo

Biden should stop throwing salt into the wound with threats that could permanently damage a relationship. As for the crown prince, he should publicly tell the American and European people that the kingdom is willing to unilaterally increase oil production if the price of oil significantly rises or economic conditions demand it.

In December, OPEC+ will have another meeting to deal with the EU sanctions on Russian fossil fuel.

He should reassure them that he can be considered a friend to the West when winter arrives and the EU embargo goes into effect. As of now, the price has not spiked despite the two million barrels of oil a day decrease in production.

The Chinese are more than happy to pick up the pieces of the damaged US-Saudi relationship, trying to undermine American interests. The Chinese are already the number one Saudi trade partner.

The Saudis have told me they need to have a good relationship with China and America; it cannot be an either-or situation. China has established outsized influence with its belt and road initiative to create a modern-day silk road through Asia, the Middle East, and Africa.

Saudi Arabia sits at the crossroads of the world’s energy supply. The Chinese, looking to project economic and military power outside their sphere of influence, have built a naval base in Djibouti to patrol the waters of the Red Sea and the Persian Gulf, hoping to eventually eclipse America as the world’s policeman on the seas.

Karen House Elliot, writing in the Wall Street Journal, said, “Relentless pursuit of a chimerical nuclear deal with Iran – first by the Obama administration and now its Biden redux – has left Saudi Arabia with no trust in its former partner and protector.

As a result, the Kingdom, which Joe Biden once said he wanted to make a “pariah state,” has declared unequivocally its independence from American leadership by befriending Russia and China and cutting oil production to shore up its revenue despite repeated pleas from the White House.”

In 2020, the Brookings Institution’s Bruce Reidel wrote, “Saudi Arabia values its relations with China, but it is well aware of their limits. Beijing will not replace Washington in Riyadh’s worldview, even if US-Saudi relations falter in the next administration.”

But does the Kingdom still see it that way?

Just as the Indians will be tied to Russia because so much of their defense is Russian-made, the Saudis know that they must be on good terms with the US because they depend on decades of purchased American weapons systems. In addition, Saudi funds supporting our defense industry are crucial as we shift our focus to China as our primary threat, requiring a financially healthy American defense sector.

The best way to stabilize the region is for the US and the Saudis to find a way to manage the current disagreements without harming a relationship both need for their national interests.

The best way to do that is to focus on the primary destabilizing factor of the region, the Iranian desire for a nuclear weapons umbrella to continue their hegemonic expansion. Iran desires not only Israel but also the Saudi oil fields and the holy sites of Mecca and Medina under Saudi control. Shi’ite Iran does not like Sunni Saudi Arabia in charge.

And remember, the Iranians, not the Saudis, are genuinely in bed with Putin. Just look at those Iranian drones landing on Ukrainian civilians with Iranian Revolutionary Guards teaching on captured Ukrainian soil in Crimea.