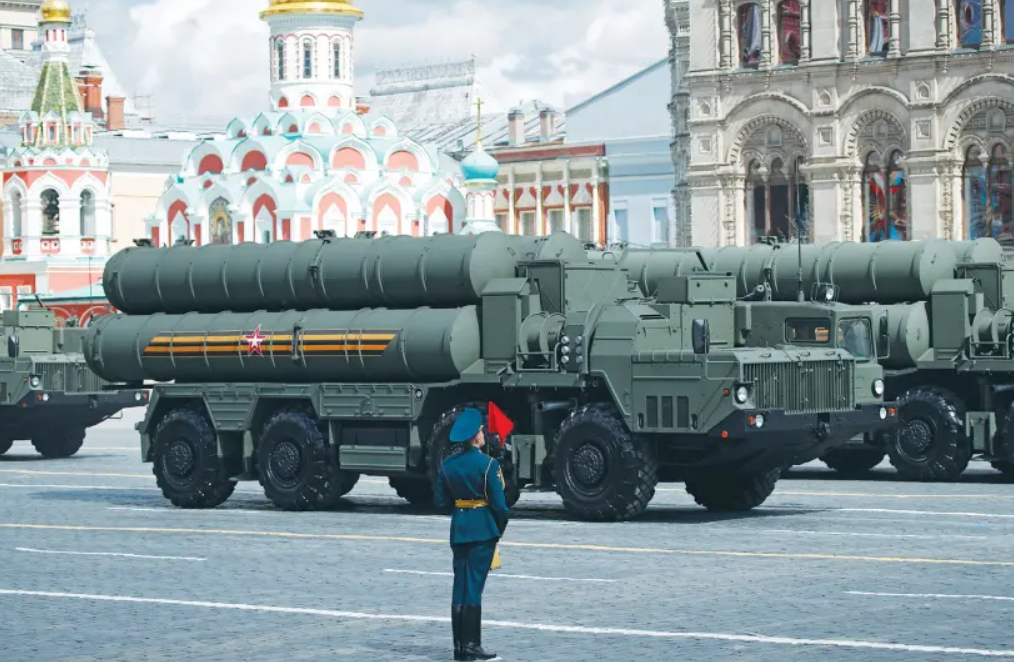 Photo: Russian S-400 anti-aircraft missile systems drive by during a rehearsal for the Victory Day parade in Moscow last year. It would behoove Erdogan to revisit his most egregious mistake with the US, buying the anti-missile system from the Russians.(photo credit: MAXIM SHEMETOV/REUTERS)

Does Russia’s invasion of Ukraine lay the groundwork for Turkey to have a genuine rapprochement with its NATO allies? Turkish President Recep Erdogan has said in light of Turkish help to Ukrainian war efforts, “there is no reasonable justification” for not removing sanctions and embargoes on military sales and transfers to his government.

While it is true that the Turkish Bayraktar drone has been helpful to Ukraine in targeting Russian military assets, the reasons why there is an arms sale embargo against Turkey are a very long list that has grown over the years. Turkey’s ethnic cleansing of Kurds in northeastern Syria is not much different from previous Turkish actions in Cyprus or from what Russia is doing in Ukraine.

While the US and its NATO allies have appreciated Turkish help, including mediating between Ukraine and Russia, they know Erdogan’s self-destructive monetary policies have forced him to reach out to his erstwhile NATO allies for his survival. An authoritarian’s first job is self-preservation. He must be in real distress. Despite the Islamist ideology, which animates his anti-Zionist actions, he has toned down his antisemitic rhetoric. He recently met with Israeli President Isaac Herzog and has called for a new beginning with Turkey’s former Israeli ally.

Before Erdogan came to power, Turkey and Israel were close allies. Turkey was the first Muslim country to recognize Israel, and after the Oslo Accords grew even closer. If not for Erdogan reconstituting the nation and its government in the image of the Muslim Brotherhood while allying with his fellow Islamists in Gaza, there would be no reason for the two countries not to still be regional security partners.

It would behoove Erdogan to revisit his most egregious mistake with the US, buying the advanced S-400 anti-missile system from the Russians, leading to the Turkish expulsion from the F-35 fighter jet program. The US recently suggested he send it to Ukraine and would be willing to help cover some of the costs. With the Turkish economy in dire straits and few beyond Belarus openly sympathetic to the Russians, Erdogan must decide whether he wants to bite the bullet and move back towards the West and America’s most important regional partner, Israel.

But will it be genuine rapprochement or just realpolitik? What should the West and Israel demand after years of being double-crossed and threatened by Erdogan in the days when he felt he had the leverage to do as he pleased? Remember when Erdogan blamed the US for the failed coup in 2016. He cut off the electric power to the US airbase in Incirlik, which houses tactical nuclear weapons, something no NATO ally should have done.

Israel has even more issues with Turkey. Erdogan’s support of Hamas and hosting its members who plan terrorist attacks from Turkish soil is something Israel will insist on ending if they genuinely want to warm ties. During the last Gaza war, Erdogan’s antisemitism and rhetoric were on full display, calling Israel a “terrorist state… murderer of children and old people who is only satisfied by sucking their blood.”

According to an article published by Foreign Policy Research Institute, “these renewed contacts and resuscitated diplomatic channels should fool no one: deep, structural limitations in the Turkish-Israeli relationship will keep a more profound rapprochement off the table for the considerable future.”
﻿Interestingly, Turkey and Israel sixty years ago shared intelligence to curb “Soviet expansionism, Arab nationalism, and terrorism.” Back to the future, the same problems echo through the Middle East today.

Israel does not trust that Erdogan will change his spots, and it would like nothing better than for Erdogan to be voted out of office next year and take their chances with a likely friendlier opposition leader as president. But a lot can happen in the next year, and if Israel can get Turkey to decrease their support of Hamas and lower the flames of antisemitic rhetoric, that would be a stabilizing effect worth the effort.

Equally problematic is Turkish support for Israeli Arab Islamists who instigate violence on the Temple Mount, where Muslim sensitivities are always on a hair trigger. With Ramadan approaching and terror on the rise in Israel, Erdogan could help tamp down the violence if he chooses.

Erdogan’s policies today are at odds with regional Muslim nations like Egypt, Saudi Arabia, the UAE. Not to mention Greece, Cyprus, Israel, and Italy, whose planned gas pipelines from the Israeli gas fields will transit through those nations and the rest of Europe. Turkey wants a piece of the action and has been taking provocative steps claiming Cypriot gas fields as their own.

Can a partial rapprochement with Israel be forged? Is it in Israel’s political interest to develop this a year before the Turkish Presidential election?

Europeans are still smarting from Erdogan’s threats to unleash millions of refugees into Europe, which he has used to extort money to hold off the waves of potential immigrants. It won’t take much for Europe to warm up to Turkey but they really should hold out for more Turkish concessions, or else the threat of overwhelming their countries with refugees will be leveraged again soon.

Turkish alignment with Russia is not a natural partnership. Turkey fears Russia and now needs NATO and the US. Turkey and Russia are already on opposite sides in the war between Armenia and Azerbaijan, in Syria and in Libya. There will be no better time for Turkey to rid itself of the S-400 system, especially with Russia in the world’s PR dumpster. How reliable will a NATO ally ever be if they cannot distance themselves from Russia now?

The only thing for sure in the Middle East is that alliances change with the wind. A better transactional relationship with Erdogan that could decrease his support of Islamist brethren in Gaza and Israel is worth the effort.