Turkey’s ever-changing ties: Is Ankara planning an incursion into Syria? 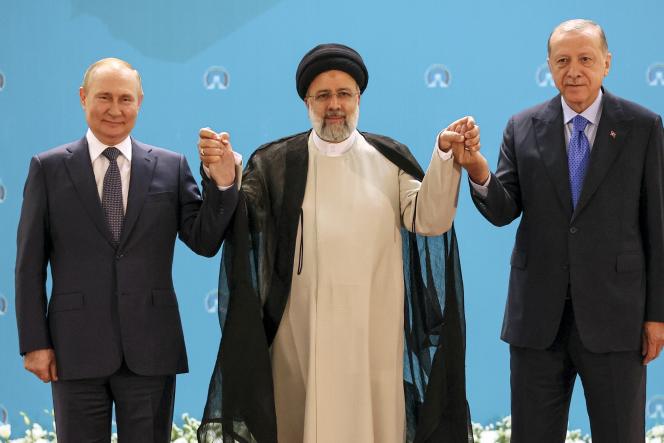 Published in the September 5, 2022 issue of the Jerusalem Report.

Turkish President Erdogan met with Iranian President Raisi and Russian President Putin this summer to convince them to accept his longstanding plan for an invasion of northern Syria. After failing to persuade them in Tehran, Erdogan tried again in August in a one-on-one meeting with Putin in Sochi, Russia. “Ankara’s central role in facilitating the Russia-Ukraine grain deal could strengthen its hand in securing Moscow’s acceptance of a Turkish military incursion into northern Syria,” according to Al-Monitor.

Seth Frantzman of The Jerusalem Post wrote, “Turkey has vowed a new invasion in Syria, modeled on Russia’s invasion of Ukraine. Their premise? Claiming a need to ‘clean’ or ‘clear’ an area near the border of ‘terrorists,’” something with which Russia can empathize.

In 2018, Turkey and its Syrian Sunni Islamist allies invaded and ethnically cleansed the Kurdish population in the Afrin region of northwestern Syria. Over 300,000 people were displaced and forced to resettle in refugee camps in the east of Syria. The world yawned as Kurdish, Christian and Yazidi minorities were targeted. Turkey then relocated hundreds of thousands of Syrian Sunnis, dislocated by the Syrian civil war and living in Turkish refugee camps, into the ethnically-cleansed areas.

Turkey seems poised to continue the next phase of its invasions, ethnic cleansing and repatriation of hundreds of thousands more Syrian Sunni refugees who have lived in Turkey since the beginning of the Syrian civil war. Erdogan wants to complete a security zone along the whole length of Turkey’s border with Syria, extending from its southern border 20 miles into northern Syria. The Kurdish cities of Tal Rifaat and Manbij are Turkey’s next goals, hoping to eradicate the Syrian Kurdish forces (YPG).

Turkey has repeatedly claimed that the YPG Kurdish military in Syria is aligned with the Turkish PKK, which they and the US consider a terrorist organization. Erdogan claims that for Turkish national security, it must destroy the YPG. Complicating matters is that the Kurdish Syrian YPG is allied with America, and has been instrumental in fighting the resurgence of ISIS in Syria. For context, the strategic goals of the Kurds of Syria differ from those of the Iraqi Kurds of northern Iraq in Kurdistan, a much more significant American ally.

Ten percent of Turkey is Kurdish, and viewed by the Turks as somewhat of a “fifth column.” However, they are considered a critical constituency to woo when election season returns. This is especially important today, with Erdogan perceived as vulnerable in the next election. If he deems it politically advantageous, he may hold off his invasion of Kurdish Syria until after the election so as not to motivate Turkish Kurds to move en masse to a rival party.

Nobody will stop Turkey when it chooses to invade Syria. In the dizzying world of the Middle East, Turkey is on the opposite side of Russia and Iran when it comes to Syria, but otherwise works together with them more times than not, especially to embarrass America. Russia, Iran, and the weak Syrian government of Bashir Assad view Turkey as an invader of Syria, harboring Sunni jihadists in Turkey’s Syrian enclave. Then again, Iran and Russia have supported the genocidal Mr. Assad while he ethnically cleansed four to eight million Syrians, and Iran is a far greater occupying predator than Turkey.

To summarize, the Syrian situation plays out like this:

1. Turkey wants to control its border with Syria by ethnically cleansing – eliminating one way or another – its Kurdish population, and resettling a million Syrian refugees there.

2. Iran wants to turn Syria into Lebanon, a Persian satrapy, part of its long-term plan to threaten Israel from all sides.

3. Russia wants a stable Syria to consolidate its gains of an expanded air and sea base on the Mediterranean in Tartus and Latakia provinces.

4. Israel wants to be able to continue to attack Iran and its proxies’ installations of precision-guided missiles and drones throughout Syria, with Russia turning a blind eye.

5. America wants to protect its soldiers in al Tanf Syria allied with the SDF (Syrian Democratic Forces), which are primarily Kurdish YPG.

With the US distracted by much bigger geopolitical fish in China, Taiwan, Ukraine and Russia, Turkey knows it has northern Syria for the taking, and only lip-service disapproval from the West will follow an invasion. During his visit to the Middle East, President Biden said he would not abandon the Middle East to Russia, China, and Iran. Does anyone believe him? Certainly not the Iranians, Chinese, Russians and Turks. Turkey and its Islamist president see themselves as heir to the Islamic world, much as the Ottoman Empire ruled the region for centuries.

This brings us back to the meeting in July between the leaders of Iran, Russia and Turkey (Astana group), who attempted to sort out their differences on dividing up Syria and keeping the US humbled in the eyes of the regional players. Turkey would like cheap Russian oil and grain, but what price will Putin extract? Turkey can allow or veto the admission of Sweden and Finland to NATO, which Russia opposes.

At the same time, Turkey also wants to move closer to the US, as it perceives its interests have turned again to the West. The US certainly has interests at stake here. Turkey, a NATO member with a Muslim Brotherhood Islamist as its president, sits in one of the most pivotal geostrategic areas of the world, and has been showing signs of wanting to reintegrate with its former Western allies.

Turkey also sees rapprochement with Israel in its interest, despite having frosty diplomatic ties at best in the recent past. Even during times of strain, Turkey has maintained strong economic trade with the Jewish state, despite its disparaging public statements.

Israel was set in July to reopen its economic office in Turkey after a banner year in business and joint financial conferences. According to Israel Hayom, bilateral trade between Israel and Turkey amounted to $7.7 billion in 2021. Turkey is Israel’s fourth-most important economic partner, Israel and Turkey have enjoyed a free trade agreement since 1997.

Hay Eytan Cohen Yanarocak, a Turkey analyst at Jerusalem Institute for Strategy and Security, wrote, “Can a Renewed Alliance Between Israel and Turkey Stabilize the Middle East?” He is cautiously optimistic about the lull in rhetorical hostilities between Erdogan and Israel, with Turkey inviting the Israeli president to Turkey and sending its foreign minister to Israel.

Unfortunately, Erdogan returned to his antisemitic core after Israel’s recent war with Palestinian Islamic Jihad, saying, “There is no excuse for (Israel) killing children, babies in swaddling clothes.” This is reminiscent of his remarks after the Guardians of the Wall war in May 2021, when he called Israelis “murderers (who) kill six-year-old babies, murderers who make women crawl.” The US State Department called his comments “reprehensible” and “antisemitic.”

However, according to Yanorocak, “Jerusalem can enjoy the benefits of a temporary détente, and even a shaky peace can lay the groundwork for whoever comes after Erdoğan. If bilateral relations bring economic and security benefits – and even more so if they can foster people-to-people ties – it becomes more likely that Erdoğan’s successors will see the relationship with Israel as desirable.

“The case in favor of reconciliation between Israel and Turkey is strong because of the long history of close diplomatic and military ties. Both nations share a common ally in Azerbaijan; both border Syria and would prefer not to see the Russia-Iran-Assad axis succeed there. As a NATO member, Ankara is at least nominally aligned with the US, Israel’s greatest ally. If Turkey and Israel – which possess the two most capable militaries in the Middle East – could set aside their differences, they would together be a powerful pro-Western force in the region. Erdoğan, moreover, is diplomatically isolated and faced with an economic crisis, and thus could use all the help he could get.”

Is Turkey returning to NATO and a Western orientation? Is its outreach to Israel, Egypt and the Sunni monarchies real on the ground, or just wordplay? Is it more an ally of Iran and Russia than the US? Many analysts have been highly critical of Erdogan’s anti-American, antisemitic, pro-Russian and pro-Iranian orientation. They see Erdogan as a Muslim Brotherhood true believer who can, at best, move closer to the West only on temporary shared interests.

So what are the goals of the players?

According to al-Monitor, Turkish diplomats are embarking on a “five-pronged diplomatic drive” toward its former opponents, namely the United Arab Emirates, Armenia, Saudi Arabia, Egypt, and Israel.

America’s goal is to move Erdogan closer to NATO. The European objective is to keep a new wave of Turkish refugees from landing on its shores, and resettlement in northern Syria is something they prefer, even if they won’t say it aloud. Israel would like Turkey to distance itself from Hamas, which coordinates terrorist attacks from Hamas organizations located in Turkey. Turkey wants Russian oil and grain, and in exchange, Russia would like to use Turkish trade to evade Ukrainian sanctions.

The Gulf States and Egypt would like Turkey to decrease its support of their adversaries Iran, Qatar and the Muslim Brotherhood. Egypt and Turkey would like to increase trade and have a more amicable relationship sharing Eastern Mediterranean gas. Turkey needs these nations to help it recover from its economic turmoil and help Erdogan win the upcoming election. You can see from all this how enemies and friends in the Middle East are often readily interchangeable.

This brings us back to the Turkish invasion of northern Syria. The Syrian Kurds will be forced out of their homes sooner or later and have few options of where to go. Just another humanitarian tragedy that the world will care little about, like the shrugging indifference the world has for the one million Muslim Uyghurs in China who are being reprogrammed in concentration camps.

But does the US have to give Erdogan a pass to invade and ethnically cleanse northern Syria of its Kurds, again abandoning an ally who has become less important? Can the US do anything even if it wanted to?

﻿Unfortunately, the Syrian Kurds don’t offer any of the players much geopolitically, so nobody will likely lift a finger to defend them, no matter how outrageously they are