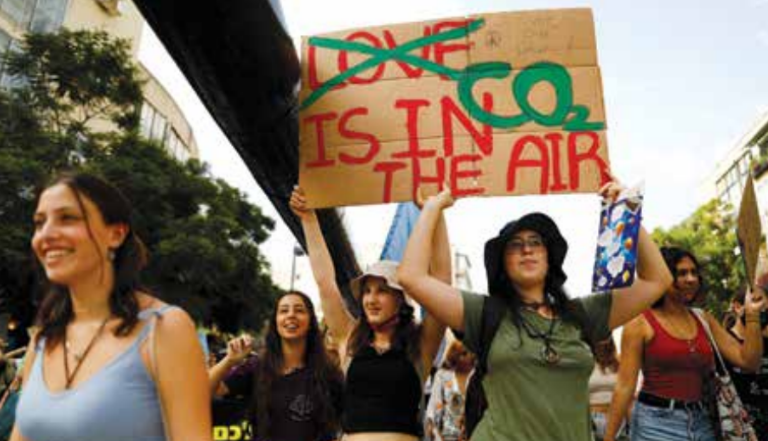 Published in the November 21, 2022 issue of the Jerusalem Report

The US National Intelligence Estimate believes climate change will affect America’s national security by exacerbating “geopolitical tensions, social instability, and the need for humanitarian aid.” Regarding Israel, the INSS says, “The effects of global warming are already felt in the region. Israel must prepare for all possible scenarios, from natural disasters to waves of refugees from neighboring countries that might appear at its borders.”

Climate change is real, and its potential effects are significant. The contentious question is how to deal with it. With so much CO2 and other chemicals already in the atmosphere affecting heat retention and raising temperature, is it still possible for current climate policies to make a significant difference, or is it too late? Predictions regarding climate are based on worst-case scenarios that often don’t consider the inevitable innovations or human adaptations that could mitigate some of the worst effects of rising temperatures.

With so much at stake, it is imperative to ask if today’s climate policies are our best options. Unfortunately, in our polarized political climate, either you are entirely on board with the recommended remedies to mitigate the dangers of a warming planet, or you are a dangerous person.

What needs to be discussed, politically correct or not, is not whether climate change is real but:

Nothing dramatizes the conflicting arguments about climate change more than the September 29 edition of The Wall Street Journal. On page two, there was a photo of a parched Salt Lake in Utah without an ounce of water. While on the op-ed page, former Democratic Senator Heidi Heitkamp made the case that hundreds of millions of people will face increased hunger because the world doesn’t appreciate the “vital role natural gas plays in food security as a core ingredient of ammonia (fertilizer).”

She says the US has the world’s most significant natural gas reserves, and we should use them to avoid a worldwide famine. “Natural gas is the best choice for a foundational energy supply that increases global security.”

The demand for cheap energy in the US, i.e., fracking, will be strong among at least half the populace that either thinks the damage from climate change is overstated or believe their proposed sacrifices will not produce significant benefit. It is human nature to focus on the immediate and painful effects of higher energy prices rather than the unknown future pain they will encounter if climate change is as bad as its worst prognosticators claim. This autumn’s decrease in fossil fuel production by the OPEC+ group, combined with Biden’s climate policies crippling the US oil and gas industry, will raise energy prices, increasing the chance of a worldwide recession.

No matter what one thinks of about the dangers of climate change, today’s green energy policies have stressed the US and European national security. In the NY Sun, Larry Kudlow says Biden has taken us from “energy independence to a state of energy dependence on our adversaries…Closing the fossil spigots has jeopardized not only the economic welfare of our citizens…but our national security posture abroad.”

A WSJ editorial opined that “amid war in Europe, a global energy crisis, and risk of global recession a serious US administration would do everything in its power to encourage more domestic energy production. This Administration would rather make America more dependent on dictators.”

The reality is that the same amount of carbon goes into the atmosphere, whether purchased from Saudi Arabia or Venezuela or produced in the US or Europe. The only difference is that we virtue signal our green energy credentials by reducing our fossil fuel production while hurting our national security interests by empowering authoritarians.

So, just how bad could climate change be?

According to the Deloitte Center for Sustainable Progress, “Insufficient action on climate change could cost the global economy $178 trillion over the next 50 years, a 7.6% cut to global gross domestic product (GDP) in 2070 alone.” According to a Nobel economist, climate change will decrease GDP by 2100 by up to 4%. Another study said there will be over 50 trillion dollars of damage yearly, 5% of GDP by 2100, assuming no human adaptation, a false assumption.

Yet, an article in Nature Climate Change said: “that reducing emissions 95% by 2050 would cost 11.9% of gross domestic product or more than $15,300 for each American citizen every year.”

Bjorn Lomborg, President of the Copenhagen Consensus, says, “UN Climate Panel’s latest report finds damage from unmitigated climate change will cost the world 2.6 percent of GDP by 2100. By then, the UN expects the average person to be 450 percent as rich as today, and negative climate impacts mean we will only be 438 percent as rich.”

Unfortunately, energy policy is framed as a binary choice without nuance. Advocacy reigns in place of a dispassionate debate, and disparaging those you disagree with is tolerated and applauded. These self-inflicted wounds impair our ability to choose the most sensible policies that involve tens of trillions of global wealth. The choice will be between how much we invest towards carbon neutrality, lowering the rise in temperatures as soon as possible, vs. how much money we will need to divert from education, healthcare, and research in non-climate technologies like medicine or cyber-security.

It is political kryptonite to say that financial choices need to be made. With considerable investment in climate policy, we will likely be less well off financially, as the positive effects of lowering carbon will not be felt for decades. Unfortunately, many renewables are not cheaper unless subsidized, and the most effective carbon-neutral energy source that could make a real difference in the climate is nuclear energy, something out of favor in most places.

When US Climate Czar John Kerry flies to Senegal on a private jet and tells Africans not to use coal and oil, knowing that the International Energy Agency says six hundred million Africans lack electricity, it falls on deaf ears. This is not to minimize climate change but to remember that most of the world will choose immediate economic advancement over restrictions they perceive as harmful to their economic growth.

An inconvenient truth that Al Gore cannot say is that even if the US stopped fossil fuel consumption and became carbon neutral immediately, it wouldn’t significantly reduce temperatures because China and the developing world are expanding their use of coal, dwarfing any American and European efforts to combat global warming. China’s future promise of carbon neutrality will likely be abandoned when the choice is continued economic growth or reduced carbon emissions. They see today’s US climate policy undermining America, a primary Chinese goal.

What are some possible choices?

A good start would be investing more in R&D in new technologies like fusion, safer nuclear power production, and increased research for cost-efficient and more environmentally sustainable battery storage. Mining lithium and other minerals for batteries have a significant environmental price. Think synthetic minerals, cleaner fracking, cloud seeding, reforestation to remove CO2, better carbon capture at steel mills, storing carbon in geologic basins, investments in recycling wastewater, and much more. Should our government prioritize a “moon shot” in green research in partnership with the private sector that could lead to energy alternatives that today are on the drawing board but could be cheaper and more environmentally friendly in the long run than what we prioritize today? Can we increase the use of the most effective renewable hydropower?

I know to some it is heretical, but should we be investing in adaption strategizes to mitigate climate change’s inevitable effects? Many climate models minimize the impact of human technological adaptation. A simple example would be the low-tech solution of subsidizing painting rooftops white and asphalt gray. That would significantly lower temperature in urban environments, decrease energy demands, lowering carbon production. Climate contrarian Bjorn Lomborg prioritizes adaption for the inevitable effects of climate change. “The best way to start thinking about global warming is to think about it as a chronic disease, like diabetes. We need to manage it… most critical is how much climate damage we can avoid.

More severe weather-related damage will cost the economy more with each hurricane and drought season as more people put themselves in harm’s way, choosing to live in vulnerable coastal and drought-stricken regions. However, the politically correct narrative that says every hurricane is due to climate change is incorrect and undermines public trust, who realize not every weather event is climate-change related.

When CNN’s Don Lemon asked the director of the US National Oceanic and Atmospheric Administration’s National Hurricane Center if climate change caused Hurricane Ida to be more extreme, Jamie Rhome answered, “I don’t think you can link climate change to any one event. On the whole, on the cumulative, climate change may be making storms worse. But to link it to any one event, I would caution against that.” That did not sit well with Lemon or many in the mainstream media who blame every natural catastrophe on climate change.

If climate change and the policies to remedy it are the security issue of our time, let us be wise, prudent, and above all, humble in our predictions and policy recommendations. A climate think tank recommended we get to net-zero emissions globally as rapidly as possible; if we want to keep warming to an increase of two degrees Celsius (3.7 degrees Fahrenheit) by the turn of the century, what the Paris protocol recommends. That is not realistic, with most of the world’s big polluters exempt from carbon restrictions for decades to come.

However, doing little and ignoring the problem is unwise. We need out-of-the-box thinking and investing wisely to moderate temperature increases without destroying the world’s economy and increasing poverty. We must challenge some sacrosanct climate policies to make the most cost-effective and beneficial choices. We don’t need people repeating talking points; we need wise counsel, something in short supply among our political elite on both sides of this debate.

President Biden should choose US security over partisanship regarding Iran